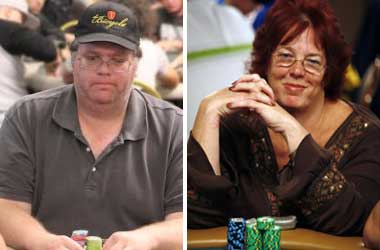 There’s probably a million poker players out there wishing that they could get their hands on a coveted Platinum Pass package from PokerStars.

The online poker giant decided to surprise two very special individuals in the poker community by giving them a Platinum Pass each as a Christmas Present.

The two players that received these passes were Kevin Mathers And Linda Johnson who are veterans in the poker community.
$30,000 Christmas Presents.

The Platinum Pass has a value of $30,000 and includes the $25,000 buy-in to the inaugural PokerStars Players NL Hold’em Championship (PSPC) that takes place in the Bahamas from January 6-10. This high stakes poker event is being promoted as the biggest poker event in the history of the game and the winner will walk away with more than a million dollars in prize money.

The Platinum Pass package also includes 6 nights’ accommodation at the beautiful Atlantis Resort and $2,000 in room folio and travel expenses.

Kevin Mathers has a reputation for being one of the hardest working individuals in the poker industry. His contributions to the game of poker over the years have been immense. Some of the posts that he has held over the years include being the moderator of the popular Two Plus Two poker forum and taking care of the World Series of Poker (WSOP) Twitter account.

“KevMath” as he is popularly referred to has also worked for some of the leading poker publications in the world including Pocket Fives and Bluff Magazine. There were a lot of individuals out there that PokerStars could have selected to gift them a $30,000 Christmas present but given the dedication and hard work that “KevMath” has put in, PokerStars decide to select him as one of the two beneficiaries.

When it comes to the list of women who have made a massive impact on the game of poker, there is not a long list. Linda Johnson is certainly one of those women who make the list as her reputation for being the First Lady of Poker precedes her.

Lindy Johnson who has a WSOP gold bracelet from her win in 1997 was inducted into the first ever Women in Poker Hall of Fame in 2008. She has also been an ambassador for women in poker and has made massive contributions via her work in poker tournaments and media.