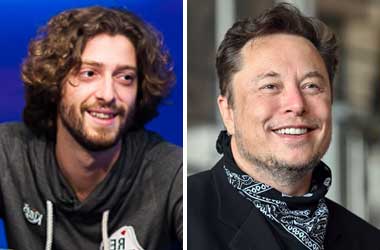 Igor Kurganov is one of the most successful poker players in the world, with more than $18.7 million in total live earnings.

Throughout his career, he has traveled the world competing in major tournaments, winning titles, and earning huge sums of money.

But Kurganov’s massive success as a poker player isn’t the only thing that makes him feel happy and fulfilled. More than all the glory and fame associated with being a top poker pro, Kurganov is an avid philanthropist who co-founded the Raising for Effective Giving (REG), a charity organization comprised mainly of professional poker players who are passionate about supporting worthy causes.

Kurganov has taken a step back from tournament play over the past couple of years to focus more on REG. Now, it has emerged that the Russian poker pro and philanthropist worked with Elon Musk in one of the business magnate’s most recent charity works.

It turns out that Kurganov advised Musk on choosing the recipients of $5.74 billion of Tesla shares which were donated to charity in November 2021. While the beneficiaries of that generous gift remain a mystery up to this day, it emerged that majority of the recipients are primarily working with Kurganov.

Subscribing to Kurganov’s “effective altruism” philanthropic movement, Musk enlisted the poker pro to maintain contact with the grantees and look over their proposals.

Musk who has drawn some flak over the years for what others claim as his lack of commitment to doing charity works is fast becoming a philanthropist on the level of his billionaire contemporaries. Over the past couple of years, the Tesla founder has showered eight-figure grants to worthy causes, including COVID-19 research and fighting climate change.

Kurganov and his long-time girlfriend Liv Boeree are now more focused on philanthropy having scaled back their poker endeavors since 2020. Kurganov founded REG in 2014 with Boeree and German poker pro Philipp Gruissem. In its first two years, the charity managed to raise $1.5 million.