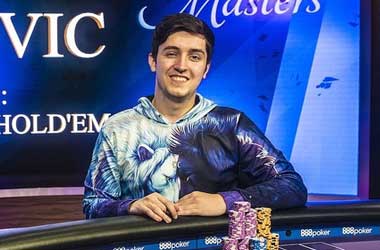 Steffen Sontheimer used last year’s inaugural Poker Masters to make a name for himself and it seems fitting that young Ali Imsirovic did the same in this year’s edition.

The 23-year-old broke out in a big way by winning back-to-back events en route to a $1,288,600 payday and a Poker Masters Purple Jacket.

Even though Imsirovic won about $50,000 less than David Peters over the course of the seven-event series, Imsirovic tallied 10 more points.

After winning his second event, Imsirovic said that the win was very prestigious for him because the Poker Masters features some of the best players in the world. He explained that the WSOP Main Event is viewed by many as being more prestigious but he claimed that winning the WSOP Main Event entails getting lucky against a field that is below average. He went on to say that in Poker Masters events, players will get destroyed if they aren’t consistently playing to the best of their abilities.

Imsirovic started the 2018 Poker Masters by finishing 8th and winning $27,600 in the $10K Opening Event. He then won $462,000 when he topped a field of 66 players in the $25,000 No-Limit Hold’Em event before entering the $50,000 No-Limit Hold ‘Em event as a late entry. He had over half of all the tournament chips in front of him as he sat at the final table. He methodically eliminated the remaining 5 competitors to claim the $799,000 cash prize. In the final event, Imsirovic did not finish in the money but the Purple Jacket was his when Brandon Adams also got sent packing early.

In a statement, Ali Imsirovic said

There are still plenty of guys I think are much better than I am, so I got a lot of work to do. I just ran better than they did but I’m looking forward to the challenge I’ll play more with these guys and feature high rollers and just trying to improve and get to their level.

David Peters finished the Poker Masters in second place with 650 points to lock up a $1,343,200 payday while Brandon Adams finished in third place with 510 points and $543,000 into prize money.