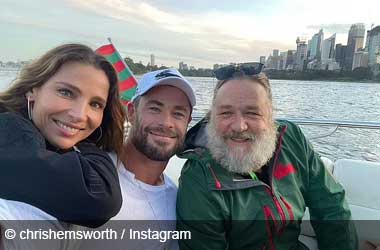 The Poker Face movie crew were busy filming in New South Wales (NSW), Australia for the last eleven weeks in the midst of the COVID-19 pandemic. The film starring Kiwi born Russell Crowe was expected to finish production by the end of August.

Russell Crowe who now lives in Australiathe entire crew were tested thrice a week for the last 11 weeks to ensure that they were COVID free.

For the safety of cast and crew and the wider community, the production has been immediately paused and everyone instructed to isolate whilst the situation is looked into.
We have followed strict protocols with cast and crew being tested 3 times a week for the past 11+ weeks.

We also feel for the wider community going through these difficult times.
We hope this situation will be confined and we can be back up and running very soon.

Russell Crowe is directing the movie and also starring in the main role. The film is being produced by Fox Studios and centers around the life of a tech billionaire who is exploited. To get back at his enemies, he engages in a high stakes game of poker to teach his enemies a lesson or two.

The movie producers wanted the film to be shot in Miami but Russell Crowe did not want to shoot in America. He convinced the producers to movie the shooting over to Australia and they picked NSW as the location.

NSW has experienced a massive spike in COVID-19 cases during the last two months and has the most number of COVID-19 cases throughout the country. The entire state has been in lockdown for the last month as the NSW government has continued to warn residents not strictly abide by the lockdown measures.

Russell Crowe is one of the most popular Kiwi-Australian actors in the world. He has starred in a number of blockbusters including A Beautiful Mind and Gladiator. His popularity did not stop him from getting criticized on social media as a lot of Aussies took to social media to question the NSW government and criticize Russell Crowe for filming Poker Face when the entire state was in lockdown.

Aussies in NSW wanted to know why they had to remain behind closed doors and keep their businesses closed but a celebrity like Russell Crowe could keep filming Poker Face in the midst of the lockdown. The NSW government hasn’t responded to any of the criticism and isn’t likely to.

While the criticism does seem justified, at the end of the day it is helping to bring more attention to the new Poker Face movie.