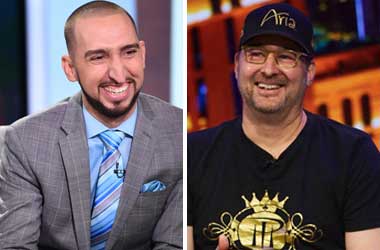 The highly-anticipated heads-up match between Phil Hellmuth and Tom Dwan on High Stakes Duel isn’t going to happen anytime soon. The Poker Brat will instead face Fox Sports host Nick Wright as his next opponent on the new poker TV show.

The latest announcement came as a bit of a surprise to many poker fans, as they were expecting Dwan to turn up as Hellmuth’s third opponent, as earlier suggested by Brent Hanks and Jeff Platt on their YouTube podcast No Gamble, No Future. Many were left disappointed, but some also thought the upcoming match would offer a lot of entertainment value, considering that Hellmuth and Wright share the same outspoken personality.

For those who are not quite familiar with Wright, he currently co-hosts a popular sports talk show on Fox Sports, First Things First, alongside Kevin Wildes, Jenna Wolfe, and former NFL wide receiver Brandon Marshall.

Wright is well known for being one of basketball star Lebron James’ most loyal supporters. He earned his broadcast journalism degree from Syracuse University in 2007, and shortly after graduating, he appeared as a contender on the popular TV game show Who Wants To Be A Millionaire. He previously worked with multiple radio stations before securing a multi-million dollar contract with Fox Sports in 2016.

The 36-year-old is a poker enthusiast and has been studying poker strategy. The Kansas City, Missouri native will definitely be the underdog in the upcoming battle, but he said his main goal is to win and not just play the game for fun.

During his recent appearance on No Gamble, No Future, Wright gave an insight into how he would prepare for the match. He said he would not spend that much time reading strategy books or learning solvers; he would focus on Hellmuth, and study his style and techniques by watching videos of his past games.

No Gamble, No Future

Round 1 of the match will take place on July 28, with both players buying in for $50,000. The loser can call for a rematch but will need to pay another $100K as buy-in. The stakes will further double in Round 3, that’s if the loser decides to continue the battle. If a player completes a sweep after the third session, he can choose to refuse another rematch and secure the entire pot.

Hellmuth currently holds an undefeated record on High Stakes Duel. He won against Antonio Esfandiari during the show’s premiere, and followed it up with another victory against Daniel Negreanu in June 2021.