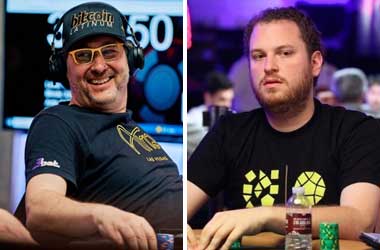 Scott Seiver is currently in Las Vegas playing at the 2022 World Series of Poker (WSOP). The Ohio poker native entered the 2022 WSOP after competing against Phil Hellmuth on High Stakes Duel which takes place at the PokerGO Studio in Las Vegas.

Phil Hellmuth took to social media to let his fans know that Seiver has decided to call for a rematch which was part of his contract. The Poker Brat confirmed that the shows organizers have planned the match for August 2022 but are yet to confirm the dates.

Hellmuth has been dominant at High Stakes Duel games beating some of the top players in the world including Daniel Negreanu and Antonio Esfandiari. His one loss on the show has come at the hands of Tom Dwan but Hellmuth quickly evened things as he won the rematch.

Seiver knows he has a tough task ahead of him but will look to do well at the 2022 WSOP and take that momentum into his match against Hellmuth.

Seiver Having A Mixed 2022 WSOP As Of Now

Seiver has over $24 million in total prize money according to the Hendon Mob and is looking to add more by winning at the 2022 WSOP. He has had a mixed run at the WSOP so far as he ended up winning the $2,500 Freezeout No-Limit Hold’em event and collecting $320,059 for his first place finish.

However he had a bad run at the FLIP & GO event and admitted to losing 43x $1,000 bullets. That’s not a lot of money for Seiver but he will want to get some winning momentum on his side and then rematch Hellmuth in August 2022.