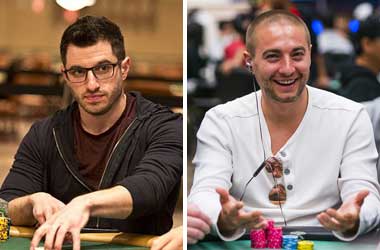 Phil Galfond has pulled off a massive comeback to grab the lead in his ongoing pot-limit Omaha heads-up match against Chance Kornuth. The Run It Once (RIO) founder is now ahead of his opponent by more than $100,000, with 20,000 hands now completed out of the 35,000 hands they both agreed to play.

Kornuth enjoyed being the dominant player for over a month, leaving Galfond with a massive $340,000 deficit on two separate occasions, but that figure has now been completely wiped out after the latter won back-to-back sessions over their last 12 sessions.

Both players battled it out on WSOP.com on Friday for their 38th session, and Kornuth had a strong run early in the game, pulling off a $125,000 lead. For a while, it appeared like the Chip Leader Coaching founder would maintain his lead through to the end, but Galfond fought back and went on a heater to conclude the session with a $113,000 gain.

But Galfond can’t be complacent, as Kornuth has already proven his abilities in the early stages of the PLO battle and could turn things around quickly. The two-time World Series of Poker (WSOP) bracelet winner still has a lot of time left in his hands to regain the lead.

Both players are competing at $100/$200 stakes, with a separate side bet involved. If Galfond wins the match, he’d get an extra $250,000 from Kornuth. But if things end up the other way around, Galfond would owe Kornuth an additional $1 million.

Galfond was a huge favorite to win the match, which led to him laying the 4-1 odds. The RIO founder won the first Galfond challenge against online legend “VeniVidi“, and he did it in epic fashion after being down more than €900,000 during the first 10,000 hands of the match.

In his latest battle against Kornuth, Galfond led in the initial sessions, but Kornuth took over in the next 10,000+ hands. Galfond was only able to score his first six-figure win during their Nov 14 session, after more than a month.

While things now appear to go in the RIO founder’s favor, things could very well change in the succeeding sessions, with 15,000 hands still left to play. With the battle being a swingy one thus far, Chance Kornuth is proving that he can take on one of the world’s best PLO players.

We will continue to follow the PLO action on WSOP.com.