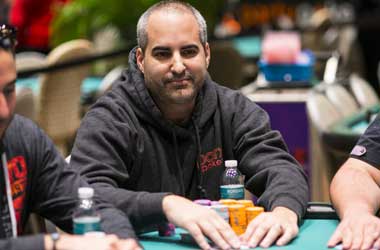 The 2022 World Series of Poker (WSOP) live festival has created another millionaire, but this time around, the winner relied on pure luck to take home the highly-coveted seven-figure sum. The lucky player we’re talking about is Pennsylvania local Matthew Glantz.

Glanz was among the 14,112 participants in the ongoing $1,000 buy-in WSOP Bounty which kicked off over the weekend. On Tuesday, July 5, he won the largest mystery cash prize on offer at the event after digging through a chest filled with envelopes.

Glanz drew the only envelope containing the jackpot prize of $1 million and he considers Shaun Deeb and Paul Volpe as his lucky charms. The players each had a 10% staking deal with Glanz, which meant that the Pennsylvania player will only be taking home $800K from the $1 million jackpot (Deeb and Volpe get $100K each).

The Lafayette Hill resident was initially critical of the hype surrounding the tournament, describing it as a “nonsense circus” event. He had a quick change of heart after hitting the jackpot as indicated in his tweet on Tuesday evening.

This is the first time that a mystery bounty event has been included in the WSOP schedule and the move was understandable given the increasing popularity of the format, mainly thanks to Wynn Las Vegas where the mystery bounty craze began.

Matt Glanz went on to finish 42nd in the actual tournament, earning an additional $20,370.

At the time of this writing, the action was down to the final table, with just five players left competing for the top prize worth $750,120. American poker pro Kevin Hong currently leads the chip count, followed by Denmark’s Wojciech Barzantny and Idaho resident David Timmons in the 2nd and 3rd spots respectively.

Also battling it out at the final table are Canada’s Michael Smith and Quincy Borland from the US. So far, four players are already out of the final table, including Ramon Kropmanns, Daniel De Almeida, Arash Asadabadi and Nellie Park.