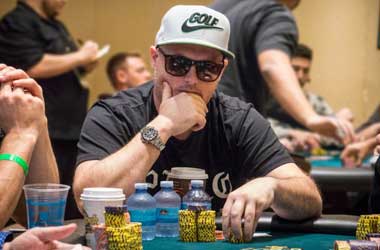 Paul Volpe has started on a strong note at the 2018 WSOP after he won his third WSOP gold bracelet at the first Championship event of the season.

The playing field was tough but Volpe used his experience to best two-time WSOP bracelet winner Viacheslav Zhukov, who ended up in 5 th place with $94,370. At the last heads up, he was able to beat three-time WSOP title holder Eli Elezra who pocketed a nice $258,297 for his play.

According to Volpe, he and Elezra ran close to each other as they neared the end but Volpe stuck to his strategy and held his nerve to go on to win.

Elezra would later go on to say that Volpe “ran like a god” at the final table which enabled him to add to his WSOP bracelet collection. Volpe credits his win not to his skill but to good fortune and remains optimistic that his streak will continue throughout the WSOP.

I was playing solid in the beginning. At Omaha, as there become fewer people, you know, you play more aggressive… I just ran like, really, really good, I think a lot of people with the same cards as me would have won the tournament. It feels great; I am excited. Hopefully I'm I gonna win another one.

Poker players are a strange breed and a number of them are superstitious. We are not sure if Volpe is superstitious or not but one thing that is noticeable is that he likes to wear his Nike GOLF flat bill cap when he plays poker. Volpe was seen wearing his Golf cap at the 2016 winning Six-Max 8-Game and also during his recent win at the 2018 WSOP. This is also the very same cap he is wearing on his Twitter display photo.

If Volpe continues to win at the 2018 WSOP, maybe he will shed some light on his favourite Golf cap.