partypoker Signs ‘The Rock’s’ Best Friend As Their New Ambassador

partypoker Signs ‘The Rock’s’ Best Friend As Their New Ambassador 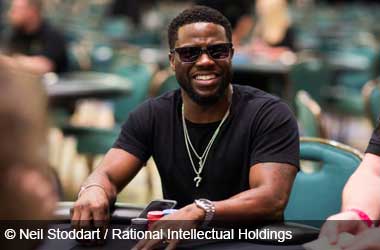 partypoker has a new global ambassador who over 88.6 million followers on Instagram. Hollywood star and comedy superstar Kevin Hart will now wear the partypoker logo in upcoming tournaments that he will take part in around the world, and will help the brand promote poker to the masses. Hart is also the best friend of Hollywood superstar Dwayne ‘The Rock’ Johnson.

Rob Yong from partypoker and Hart made the announcement in a video posted on Yong’s Twitter account, with the comedian saying his main goal is to make the world of poker fun again, a similar message he sent out back in 2017 when he joined partypoker’s rival site PokerStars.

Happy my good friend @KevinHart4real is now official @partypoker partner. Was talking about partypoker ethos at cash game with him, @Andrew_Robl @BrokeLivingJRB & Kevin promised to help us promote poker to new/amateur players, so made him do this video to commit his ass!?KTF Rob pic.twitter.com/BHjckqbhRS

Hart is among the world’s most popular poker-playing celebrities, usually participating in the highest-stakes tournaments. He became an ambassador for PokerStars in 2017 after taking part in the $100,000 Super High Roller at the PokerStars Caribbean Adventure (PCA) held during the same year.

The American actor wore the red spade logo through early 2018, but after that the poker community has not heard or seen much of him in live tournaments. However, Yong clarified that this does not mean Kevin Hart has not been playing poker.

In fact, both Yong and Hart recently participated in a cash game alongside high stakes player Andrew Robl and nightclub owner and promoter Jean-Robert Bellande. It was during this time that partypoker officially signed on Hart as its newest ambassador, courtesy of Yong.

Poker Should Be Fun, Not Technical

In the video, Hart said players should focus more on having fun than dwelling too much on the technical side of things. A lot of players, especially those who play poker for a living, tend to take everything too seriously, avoiding interaction at the table just so they could come up with the best decisions in order to win.

Hart said that this should not always be the case as players should remember that poker is a community sport, therefore everyone should do their best to have fun while playing. His addition to the partypoker ambassador stable is expected to help the brand reach a wider audience and attract more players. The Little Fockers star has more than 100 million followers across all social media accounts and has a net worth of $200 million.

His comedic reputation will help him achieve his goal of bringing back the fun in poker, though the poker community would certainly want to see him play more frequently, and be visible in as many live tournaments as possible!