partypoker Set to Offer “My Game” Interactive Tool in NJ

partypoker Set to Offer “My Game” Interactive Tool in NJ 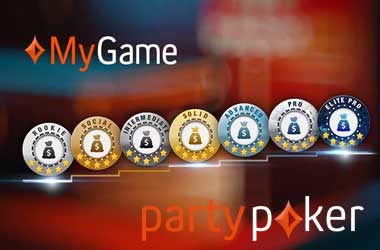 partypoker is set to launch an interactive tool that aims to help players in New Jersey analyze their game play. The new tool has a dedicated feature which detects any major flaws committed by the player.

The “My Game utility” can be activated by first completing 100 hands of gameplay in one session. It will then monitor the player’s performance and analyze their actions.

After 24 hours of each completed session, the player will receive a report from My Game which contains gameplay analyses and performance grades. The report also points out areas for improvement and offers tips for the player to enhance those areas.

My Game analyzes play through Game Theory Optimal (GTO) strategy. The tool evaluates the player’s skill level according to five categories, including key stats, three-bet range, blind stealing and defense, post-flop aggression and showdowns, which are then broken down into other particular game aspects.

The tool uses a grading system that works in a similar fashion to school letter grades. If the player receives a less than “A” grade, My Grade will offer tips and hints tailored to the specific area of the game that needs improvement.

Players will be offered two training courses if they find themselves under the Elite Pro level. They can choose either “The Clinic” or “Fundamentals” to enhance their skills and climb up the ladder. While poker is not always about achieving a higher rank, it is a fact that higher-ranked players normally build their bankrolls faster.

My Game Could Help partypoker In NJ

The new tool has yet to be uploaded to the partypoker’s New Jersey client. The plan is for it to be rolled out in the next few weeks as part of an update.

The introduction of the My Game tool in the New Jersey version of partypoker client is expected to boost the online poker room’s performance in the Garden state. partypoker is part of the Borgata license which recorded poker revenues of only $488,505 for January 2019. That figure pales in comparison with the online casino revenues generated by the same license during the same period which is around $4.25 million.

Given the meager profits generated by poker sites under the Borgata license, it is essential that iPoker operators do something to change things around. My Game could provide an edge to partypoker to enable it to fight off tough competition in the New Jersey poker market.