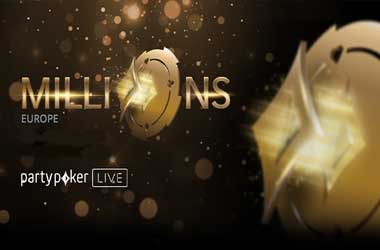 partypoker‘s flagship live tournament series is back, with the action getting underway next month.

Running from June 2 to June 12, the MILLIONS Europe festival will take place at Casino Barcelona, the same venue that played host to the finale of the MILLIONS tour back in 2018.

The MILLIONS Europe festival kicks off with the €1,100 Open on June 2 which features five Day 1s. It will be followed by the €2,200 Warm-Up on June 5 which will help players prepare for the main highlight of the series, the MILLIONS Europe Main Event which costs €3,300 to enter.

The MILLIONS Europe Main Event has four starting flights taking place from June 8-10, and surviving players will battle it out for two more days until June 12, during which a winner will be crowned.

If you like to start early, you can do so by taking part in an online edition of the MILLIONS Europe Main Event Day 1 which will run on partypoker on May 29. You’ll be required to pay the same €3,300 entry fee, with the tournament also adopting the same blind structure, only that the game will be played to 18-minute levels instead of 40 minutes with a standard ante in action.

Don’t forget that you can also qualify for the Main Event for much cheaper through the popular “centrolls” which are currently running on partypoker. These are satellites with a buy-in of only €0.01 which feed into the Phase 1 satellites. Navigate your way through to Phase 3 so you can secure a spot in the online Main Event Day 1 on May 29.

Other Side Events to be on the Lookout For

You can expect a much softer competition in these events as by that time, the top high rollers will most likely be in Las Vegas already to participate in the 2022 World Series of Poker.