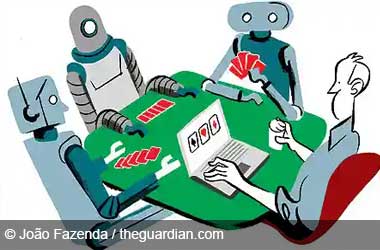 Major poker sites have remained steadfast in their goal to protect the security of players and to provide them with a fair gaming environment.

Their continuing efforts resulted in the closure of hundreds of unscrupulous accounts controlled and operated by bots.

According to its latest report, partypoker closed a total of 94 bot-controlled accounts in April. The report shows that 39 of them based in the site’s dot-com market, and 55 in the segregated dot-eu player field comprising France and Spain. As a result, partypoker confiscated $150,000 in funds and reimbursed them to the affected players.

The number adds to the 277 fraudulent accounts that were terminated by the site from December 1, 2018 to March 31, 2019, returning $734,852.15 to the victims. The issue surrounding automated programs that play against human opponents has been a cause for concern in the online poker world for quite some time now. In some cases, it is the players themselves who are able to detect suspicious behaviour at the tables.

Partypoker has been dealing with the problem through the help of a specialist team composed of former poker professionals. Through their knowledge and expertise in investigating suspicious activity, majority (75%) of the bot detections between December 2018 and March 2019 were made by the fraud team.

Americas Cardroom (ACR) which is the flagship site of the Winning Poker Network’s (WPN) also carried out a separate investigation into bot accounts, leading to 277 account closures and seizing $735,000 in funds. In its effort to be as transparent as possible, the site is posting the names of the closed accounts, alongside the players affected.

ACR’s policy in relation to banned accounts as well as reimbursement details have also been published on a page applicable to the site and all of its online poker skins.

The WPN banned accounts section can be accessed by players and lists the number of closed accounts, which can be categorized according to location. As of May 14, the site posted 41 screen names associated with bots, 12 of them coming from Latvia, 10 from Russia, six from Belarus, and five from Germany.

Players were calling out WPN and ACR in the past for alleged cheating, bot activity and collusion. Among the players who raised concerns was mid-high stakes player and poker content creator Joe Ingram. CEO Phil Nagy has since been dealing with the issue head-on, taking player complaints seriously and working hard to fix the problem.