Party and Borgata Take the Lead In New Jersey

Party and Borgata Take the Lead In New Jersey 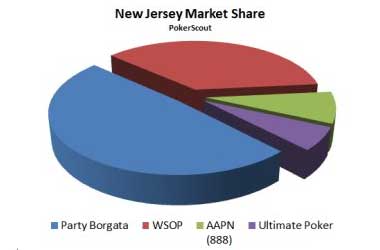 Since the launch of New Jersey’s regulated online gambling there has been great response from the audience since its launch in November 21 and opening doors to the Public in November 26.

In the first week of launch, New Jersey over took Nevada and became the highest state to have a higher player traffic of online poker players. Poker cash game traffic has been satisfactory according to PokerScout and this has seen New Jersey showing an average of poker cash game players of 348 users per day for the past 7 days since launch. This indication has made a huge difference when compared to Nevada that only has an average of 195 users.

New Jersey has four poker networks and from the four, Party/Borgata Network that consists of Party Poker and Borgata Poker has become the leading poker network having an average player traffic of 170 cash game players per day.

Another poker site that is in Partnership with Caesars Interactive Entertainment and 888 Holdings – WSOP.com is delivering satisfactory results. It has an average player traffic of 130 cash game players per day and this site is also available in Nevada.

In Nevada, Ultimate Poker was the first sit launched and also available in New Jersey but only has an average player traffic of 20 users making the site less popular. As of Monday, Player traffic is at 501 cash game users at the Party/Borgata Network and this figure is expected to rise.

Figures are still very low but it is steadily growing and player traffic seems to be continuously growing. By July 2014, the government expects to generate more than $1 billion.