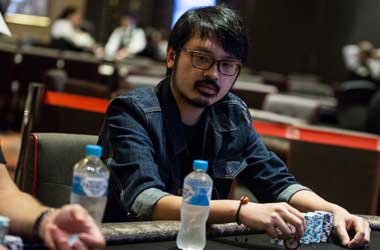 The event took place at the Paradise City Resort & Casino in Incheon, South Korea on April 11-14.

Cheung’s APPT win is the latest in his impressive list of victories. In 2017, the player smashed the world record for most cashes in one year with 67. Cheung now has more than $1.5 million in total career earnings under his belt.

Cheung engaged in a heads-up battle with Tomomitsu Ono who walked away with ₩198,100,000 ($174,580) for his runner-up finish. The Japanese pro put up a fight but it wasn’t enough to defeat Cheung who dominated the battle early on. In less than two hours of intense action against Ono, Cheung managed to capture the prestigious Main Event trophy.

Cheung had the short-stack when the final day started, sitting at the bottom half of the field but he turned things around as he was the fan favourite and had the crowd behind him at the final battle. Things started to go well for the Hong Kong pro when he doubled with rockets versus Tetsuro Tomita’s big slick. He experienced quite a few ups and downs but stuck to his game plan and slowly saw his fellow players get eliminated.

Down to the final two, Cheung and Ono both had huge crowds cheering them on. Cheung displayed a lot of patience and put tremendous pressure on the Japanese cash game specialist as he had a huge chip lead. In the end, Ono succumbed to the pressure to give Cheung the win.

Cheung has been playing PokerStars tournaments for the last 10 years but this was the first time he won a Main Event title. The victory was extra sweet for him as he had two great friends to celebrate his victory with him, fellow poker pros Lorie Lagrosas and Danny McDonagh.

In 2017, Cheung almost landed a spot at the final table of the Main Event, finishing just outside the top 10. The veteran Hong Kong poker pro said he was just happy to get into the final nine this year, and having won the event has made the experience more fun and exciting for him.

Four out of the nine finalists were from China which is another indication that there is indeed a demand for poker in China.