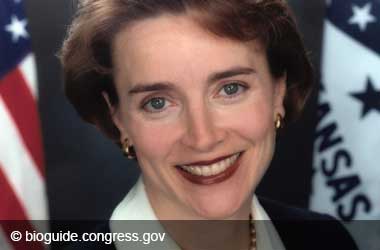 Former Arkansas Senator Blanche Lincoln is currently working with a group that wants to stop the online casino industry in America.

The former Senator recently went on record with the Financial Times to take a crack at the online gambling where she implored Congress to take another look at the 1961 Wire Act and ban online gambling.

However, she is being accused of classic fear-mongering after she compared internet gambling to terrorism. Lincoln referenced an FBI internet crime report from 2017 that itemized victim counts relating to all internet activity. The report concluded that the number of victims and the financial losses attributed to internet gambling exceeded cybercrimes that were considered terrorist-related.

There has been a vocal minority calling for the restoration of the Wire Act to what it was prior to the Obama Administration watering it down seven years ago. Casino mogul Sheldon Adelson is the biggest force behind the “Coalition to Stop Internet Gambling” and he has stated that he would spend whatever is necessary to get Congress to ban online casinos.

The lottery industry raked in $73.3 billion during 2017 which was a 1.4% increase from the previous year. Internet-based lotteries did particularly well with $176 million in sales which is an increase of over 30% over 2016. As one might have expected, Blanche Lincoln’s op-ed piece made no mention of the lottery. She did, however, take aim at the online poker industry which is legal in Nevada, New Jersey and Delaware.

Lincoln and close to 100 other Senators were among those who backed the Unlawful Internet Gambling Enforcement Act of 2006. This act was a severe setback to the online poker boom that occurred in the mid-2000s. In response to the Supreme Courts recent decision to lift the federal gambling ban, Lincoln wrote that she was very worried about the increase in online gambling in the country.