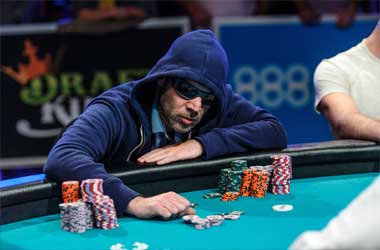 The World Series of Poker (WSOP) is widely recognized as the most prestigious poker tournament in the world and the best poker players from across the globe, make it a point to participate and see if they can win a prestigious WSOP bracelet and the WSOP Main Event.

There were a few surprises during the 2015 WSOP main event and the most obvious being the presence of an Israeli poker player by the name of Ofer Zvi Stern. The poker community is a rather small community and hence Stern took everyone by surprise when he made it to the final round of the main event as he was not very well known on the poker circuit and added that x factor to the final table.

The 36 year old Israeli managed to beat some of the top poker players in the world during his WSOP run and won $1 million for making it to the final table. He will have a crack on the 8th of November to go all the way and win the Main Event which has a total prize of $7 million up for grabs. Stern who likes to play with a hoodie and sunglasses, likes to have a little mystery surrounding him as it helps with mind games and gives him an edge over his competitors as he is a relatively unknown commodity.

Stern has not had a lot of success on the poker circuit and his last live poker win was back in 2008. He runs a software company in Tel Aviv and considers himself to be a pretty boring character, who does not like too much of the spotlight. Stern frequently travels to Europe and the United States to take part in live poker tournaments but has not had a lot of success and has won a total of $48,000 in career prize money before his exceptional run at the 2015 WSOP main event.

The mysterious Israeli poker player surprised himself with his dream run at the WSOP and is now intent on improving his game so that he can go all the way. In a statement, Stern said

I am coming at it a bit like a Little Leaguer who suddenly gets to pitch in the majors. It’s a game of skill and I will be playing against amazing professionals. I’m going to do research on how to react when curveballs happen, how to sharpen my focus, how to respond to unexpected scenarios.