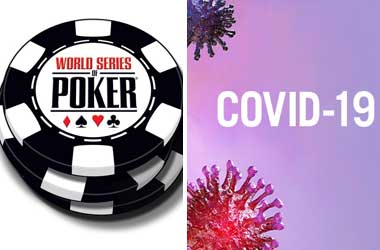 Many players are putting their quest for a gold bracelet on hold after testing positive for COVID-19.

The 2022 World Series of Poker (WSOP) festival at Bally’s and Paris Las Vegas has so far attracted thousands of players from all over the world and the live setup and massive gathering have made it inevitable for some of them to catch the virus.

Surge in Cases at 2022 WSOP and Throughout Nevada

Among prominent figures who had to self-isolate and temporarily avoid going to the venue after contracting COVID-19 include veteran commentator Lon McEachern, TV personality Rene Nezhoda, as well as poker pros David Baker and Justin Bonomo.

The state of Nevada lifted nearly all pandemic-related restrictions as early as February of this year, including the mask mandate. On May 20, Governor Steve Sisolak ended the State of Emergency which meant things have since pretty much returned to normalcy.

When the 2022 WSOP was announced, the COVID-19 rules put in place weren’t as strict as the year prior – non-vaccinated players are now allowed to enter though they are reminded to adhere to the CDC guidelines; participants are also not required to wear masks.

These relaxations could have led to an increase in positive cases and it isn’t happening at the WSOP alone, with the surge being observed statewide. Last week, Nevada recorded a seven-day average positivity test rate of 26.3%, up 11.9% on April 29’s data.

As of the moment, the WSOP has yet to provide detailed information on what should be done in case players catch the virus.

Apparently, those who tested positive for COVID-19 were only advised to withdraw and self-isolate for five days. The virus has made its way to the ongoing festival and more players are expected to get infected.

Just this week, Phil Hellmuth announced on Twitter that he too caught the virus despite being vaccinated thrice. The Poker Brat, who is once again looking to break his own WSOP bracelet record this year, has been forced to skip some of the events on his schedule until he is cleared of the virus.

Just tested positive for Covid. Thought maybe I was immune (neither of my sons got it, nor did my Mom)…Good news: no cough. Not hungry all day! Mind is a little foggy as I slept “17 awful hours.” I feel like my best chance for a bracelet was todays @WSOP $10,000 Omaha 8/B, sigh pic.twitter.com/nAe2WSf4H8

Hellmuth shared that he is generally asymptomatic. Close contacts have tested negative so far, including his sons and his mother. Hellmuth felt he had missed out on one of his best chances to win his 17th bracelet, the $10K Omaha event which took place on the same day he discovered he got the virus.