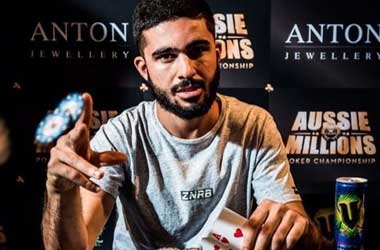 Muhammad Asad had a great start to his 2019 Aussie Millions campaign after he took down the A$1,150 Opening Event and in doing so created history by winning the biggest 1K tournament in the Southern Hemisphere.

Asad who hails from Sydney came to the tournament with not a lot of expectations on himself and wanted to take it one step at a time.

He had a lot of competition in the Opening Event as a total of 1,752 players registered. He stayed true to his game plan and slowly but surely made his way to the top and finished in first place winning A$219,980.

Asad, Jason Pritchard and Matt Edwards were the three players left at the final table. Pritchard was leading the chip count after eliminating four players in a row. The three players got into a three-way deal and agreed to set aside A$14,908 of the prize money for the ultimate winner who will also claim he ANTON ring.

While Asad was initially reluctant to enter into a deal, he decided to just give it a go. When the players returned to the table after taking their dinner break, Edwards exited the game after Asad’s deuce sent him out in third place for A$195,000.

Edwards’ elimination left Asad and Pritchard engaged in a heads-up battle. It did not take long for Asad to emerge victorious and walk away with A$219,980 and an ANTON Championship Ring.

While Pritchard took the lion’s share of the prize as part of the deal, he ended up in second place winning A$285,000.

When asked about his experience at the 2019 Aussie Millions, Muhammad Asad said the tournament draws all the best players not only from the land down under but also from countries all over the world. This year, the organizers decided to showcase the history of the tournament by displaying photos of several Main Event winners on the walls.

Asad said it just felt special to be able to play at the tournament and attributed his win in the opening event to him being calm and staying confident all the way through.

Aussie Millions, considered as the longest-running poker tournament festival in the Asia-Pacific region commenced on January 15 and will run till February 4 at Crown Melbourne. The tournament attracts over 7,500 players every year, featuring more than $21 million in total prize pools.