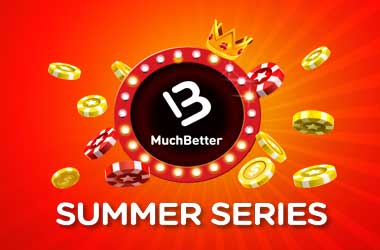 Which will allow entrants to compete against some of the world’s top poker pros for a shot at a free seat to the 2019 European Poker Tour – Barcelona in August along with a seat to the Lex Live 2 tournament series in London.

The MuchBetter inaugural Summer Series will see some of the biggest online streamers create their own private poker clubs which will let them play directly against their community members.

Participants will battle it out across four game weeks in July and August, until the 600 finalists are determined. Each club will be represented by 100 players, with 25 selected in each game week. Grand Final bonus chips will also be awarded to the top 3 players of each game week. Fans who are able to beat the team captains from each club will receive unique community prizes.

The ultimate winner will take home a full EPT Main Event package which includes the €5,000 buy-in, accommodation and expenses. The other seven finishers won’t go home empty-handed either: EPT Barcelona Main Event seats (with expenses) will also be given to the 2nd, 3rd and 4th place finishers while the 5th, 6th and 7th place finishers will each win a seat to Lex Live 2 which will take place in September. The player who finishes in 8th place will win a Sunday Million ticket, plus £250 on their MB account.

To register for a team, players are required to download the MuchBetter app and make a $10 deposit at PokerStars via their chosen team captain’s deposit code indicated above.

The Summer Series provides a once-in-a-lifetime opportunity for those who want to grab a seat at a major international tournament like EPT Barcelona. To find out more information, visit the Much Better website.