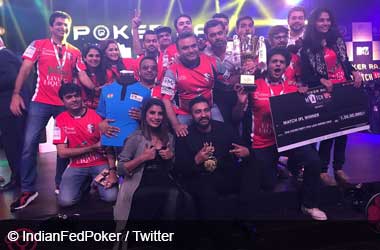 The third season of the Match Indian Poker League (MIPL) opened this week with eight teams vying for the championship.

The tournament kicked off on Tuesday, October 23 with British businessman Raj Kundra and his Bollywood actress-wife Shilpa Shetty Kundra in attendance.

There were a lot of celebrities in attendance as Kundra is looking to promote MIPL and spread poker in India. Some of the guests who were present included Actor Ranganathan Madhaven also graced the opening ceremonies with performances by Indian rising stars Shamita Shetty, Karishma Tanna and Sanjeeda Sheikh.

MIPL has been gaining massive popularity across the Indian poker circuit for being the first and the only sports poker league in India. Season 3’s top finisher will give India a great representation at the Poker Nations Cup, a televised international poker tournament established by the International Federation of Match Poker (IFMP). MIPL has made a name for itself by being the first Indian poker tournament to create ties with the global organization.

Match Poker is presented as a mind sport which requires more skill than the traditional poker format. The game involves several tables wherein a representative from each team occupies a seat at each table. The luck element is reduced as the same cards are given to each table instead of the random draw.

This season’s list of teams includes the Ahmedabad Hearts, the Jaipur Jewels, the UP Indians, the Pune Kings, the Mumbai All Stars, the Kolkatta Diamonds, the Haryana Hawks and the Bangalore Royals. The Goa Lions has dropped out of the third season following a dispute over tournament conditions.

The action only ran for 2 days but it did cause a lot of excitement in India’s growing poker community. The Pune Kings finished in first place and received a total of $184,354 for their winning performance. The Mumbai All Stars who finished in second place finished with $122,903.

Earlier this year, the former Goa Kings franchise owner Sachiin Joshi accused MIPL of being rigged, claiming Kundra fixed the inaugural tournament which took place in November 2017. In a series of Tweets, the actor went on to say that the competition was a fraud and that Kundra failed to deliver on his promises.