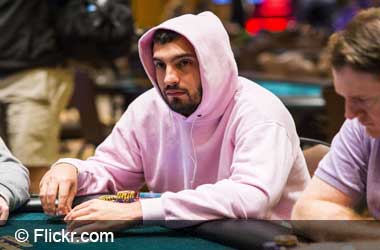 Mario Prats Garcia came to the 2018 World Series of Poker (WSOP) having played a very limited number of lives games. That did not stop the Spanish poker pro from turning heads at the $1,000 No Limit Hold'em with 30 Min Levels as he won the event and took home a cool $258,255 in prize money.

Garcia emerged victorious from the 2-day $ 1,000 No Limit Hold'em event that saw a total of 1,712 entrants. This event was the fourth WSOP event to use the big blind ante format and it took Garcia a couple of hours and fewer hands than usual to secure his victory.

While the win was swift, it did take a considerable amount of effort and skill to best over 1,700 poker players. The win also gave the Spanish poker pro his very first WSOP gold bracelet.

Born and raised in Spain, Garcia noticed that he had a flair for poker as early as 15 when he used to come out on top playing poker with his friends. Shortly thereafter, he moved over to Prague to play more online poker because tax laws and online gambling regulations were tougher in his home country. He spent a lot of time playing and learning from Pablo Fernandez and credits his win to Fernandez’s tutelage.

Live Poker Experience Not A Must To Be Successful

The Spanish pro came to the 2018 WSOP short on confidence and wasn’t expecting a great run. However, his victory proves yet again that anyone can win any event at the WSOP on any given day.

I finished second last year in one event and I thought I could never get back here. I just try to stay confident. Stay positive and any result that would come would be good for me if I play good. That’s what happened

From the 1,712 entries, only 48 players came back to start Day 2 of the event. Just four hours after Day 2 started, those 48 players were trimmed down and the final table commenced. Garcia took very well to the new big blind ante format and wasted no time in taking down the rest of the field. UK poker pro Matthew Hunt finished in second place and took home $159,532 for his win while Germany poker pro Sebastian Dornbracht took third place and finished with $114,909.