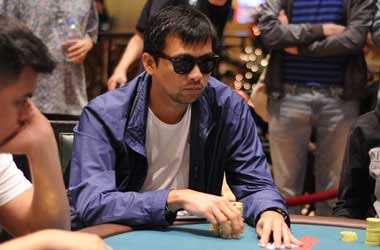 The Asia Pacific Poker Tour (APPT) Manila is one of the most popular poker tours in the Philippines and attracts poker players from all over the country as well as neighbouring countries.

The 2018 edition which was held at PokerStars LIVE Manila was a lot more attractive this time around because there were five Platinum Passes on offer giving players a chance to attend the inaugural PokerStars Players NL Hold'em Championship which takes place in January 2019 in the Bahamas.

Marc Rivera is a 44 year old Filipino poker player who has not had the success that he would have liked at the poker tables. He watched his friends Lester Edoc and Mike Takayama win a coveted Platinum Pass each and secure a seat to the PSPC 2019.

Rivera was hopeful that he would be able to win one of those Platinum Passes before the APPT Manila tournament concluded. He did just that after he took down the APPT Manila National event and won his biggest cash prize till date taking home ₱4,559,000 ($86,000) in prize money.

What make the victory all the more thrilling was that he also secured a Platinum Pass and will now be able to join his friends when they head off to the Bahamas next year.

In a statement, Rivera said

We were all together during the World Series; that was the first time that Mike won a bracelet for the Philippines and it has inspired a lot of players, including me. It’s probably this inspiration that made me win in this event.

The 2019 PSPC has a buy-in fixed at $25,000 which is a lot of money for most players but especially so for poker players in the Philippines as you have to take the currency conversion into consideration. They would have to pay close to ₱1,330,000 just for the buy-in which for the average Filipino is close 6 months of their full salary. Add to that the air-fare, hotel accommodation and food costs and it becomes unaffordable for most Filipino poker pros.

The Platinum Pass has given players like Marc Rivera the chance to make it to the Bahamas at the expense of PokerStars and will also give him a great chance to win a life changing sum of money if he can beat what is expected to be a top playing field.