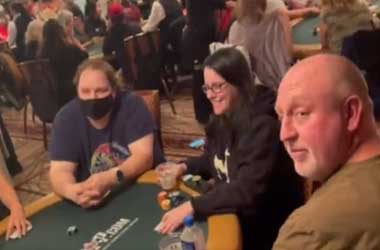 The World Series of Poker (WSOP) puts together a special Ladies Only event each year in order to encourage more women to play poker and also to provide the ladies with a level playing field for atleast one event since male poker players tend to dominate the game.

Event #22: LADIES No-Limit Hold’em Championship started on Oct 11 and will conclude on Oct 13. While the WSOP emphasizes that this is a Ladies only event, it cannot legally prevent men from participating in the event as that would be discrimination.

What the WSOP does is set a huge buy-in for the Ladies event and proceeds to give female poker players a 90 percent discount. The buy-in for Event #22: LADIES No-Limit Hold’em Championship was fixed at $10,000 but ladies could buy-in for just $1,000.

The event got a good response as over 640 ladies registered for the event. There was one exception as a male poker player thought it would be a good idea to show up and play against the ladies. Tom Hammers decided to put down $10,000 and enter the Ladies only event along with his wife and stepdaughter.

His presence at the table wasn’t appreciated by most female poker players and they ended up standing on their feet and cheering when he was busted early on. Even though Hammers did not end up in the money, he managed to get in the limelight for playing the Ladies event.

While you cannot legally stop a male poker player from playing at a Ladies event, it is generally frowned upon by the ladies and the poker community in general. However, Hammers justified his decision by saying he did it to bring more attention to what women go through and also to donate his winnings to a charity that helped women.

Going to play the @wsop ladies event. All proceeds go to womens charites. Tony Hartmann and my idea. Any donations will be welcome. Who wants the story @kevmath

Hammers did not end up in the money and hence he isn’t going to be able to donate any money to charity. Some members of the poker community supported his decision to play at the Ladies event and raise money for charity while some figured he could have just taken the $10,000 buy-in and donated it to charity in the first place if he wanted to really make a difference.

I’m usually not a fan of a man playing a lady’s event, but Tom Hammers (@Therealflugi) is an exception seeing as he juiced @WSOP Ladies Event prize pool by $10K and will donate any winnings to a women’s charity.

He got it in early here again @melissa2141_pkr, who called blind! pic.twitter.com/dMXiPx7tLR

From the way things turned out, it looks like Hammers just wanted to get some unwanted attention at the table!