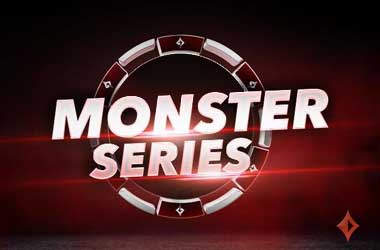 The latest edition of the $2.5 million-guaranteed Monster Series is now underway at partypoker!

The value-packed tournament kicked off on June 2 and will run until June 9, promising a week of exciting action, massive guarantees and very affordable buy-ins.

The Monster Series features a total of 108 events, with buy-ins starting from as low as $1.10 and going up to an affordable $55.

The events are categorized into three buy-in levels, Low, Medium and High, and played in various formats such as six-handed, eight-handed, Turbo, Hyperturbo, Grind, Deepstack and Progressive Knockouts (PKO).

There is enormous value on offer at partypoker’s PKOs, considering that the bounty element of the buy-in is rake-free. Because of this, partypoker’s PKOs have the largest bounties among other poker rooms with the same buy-in levels.

The Monster Series culminates on the final day, June 9, as four championship events will take place, with three of the events adopting a phased format. This means players can still play starting flights into the final phase. The first phase of each event will run throughout the day and accounts for only one-tenth of the final phase. Players are allowed to play in as many Phase1s as they wish, but if they progress more than once, they can only take their biggest stack with them through to the final.

Another reason for players to be excited is the Monster Series edition of SPINS, partypoker’s own version of jackpot sit & go tournaments. The games are three-handed and only require $0.50 to enter. Playing the special edition SPINS games will give you the opportunity to turn your $0.50 into a Monster Series ticket worth $5.50, $11, $27.50, $33, or the highest $55.

Partypoker will also be giving away up to $30 worth of SPINS tickets for players who download the partypoker app and make their first-ever real money deposit.

This is the best time for multi-table tournament players to win big for small buy-ins. The Monster Series is targeted at recreational players who play lower stakes. The last edition of the tournament took place in March, with 194 scheduled events and a similar guaranteed prize of $2.5 million.