Landon Tice vs. Bill Perkins Could Be Next Major Heads-Up Match

Landon Tice vs. Bill Perkins Could Be Next Major Heads-Up Match 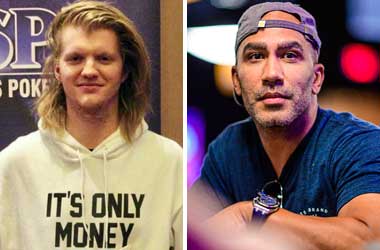 Tice gave out the initial details of the potential heads-up match on Twitter – the pair would play $200/$400 stakes over 20,000 hands, and they would battle it out online.

Tice and Perkins have yet to agree on the official start date of the match; there was also no mention about the particular online poker site that would play host to the action.

HEADS UP FOR SOULS IS ON!

I battle the Legend @bp22

More details to come, but BLOOD WILL BE IN THE STREETS ??

Tice and Perkins are not on the same level of popularity as Polk and Negreanu, but their heads-up match could still generate significant interest among the poker community considering their current status in the game.

Perkins is a businessman who plays poker on the side. He is considered a recreational player who usually takes part in high-stakes games. He is also well-known for participating in some of the craziest poker prop bets.

Tice meanwhile is a rising star – he won the 2020 Mid-States Poker Tour (MSPT) Venetian $1,100 Main Event for over $200,000. It was the first recorded live tournament score of his career.

While Polk was preparing for his grudge match against Negreanu last year, he played against other players in low-stakes games at the virtual felts. Interestingly, one of those players was Tice. After almost three hours of playing $2/$4 heads-up NLHE cash games, Tice impressively won against Polk.

Perkins is generally a casual player while Tice is a pro, giving the latter a significant edge in the match. To make the battle a bit fairer for Perkins, Tice agreed to pay his potential opponent nine big blinds per 100 hands. That equates to $720,000, if both players go on and complete the full 20,000 hands.

The question will the match really happen? Well, some are betting Perkins would eventually forget about the agreement.

Online legend Haralabos Voulgaris thinks the match would just become another one of those that Perkins initially agreed to do but ended up not completing because the hedge fund manager “got bored” or distracted along the way.

The same thing happened with his participation in the Galfond Challenge where he only played two sessions.