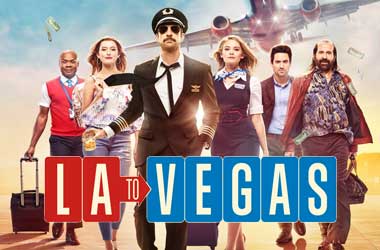 Frequent travelers to Las Vegas know that there's a certain vibe when you get on a plane that is heading to Sin City.

The excitement and tension in the air is common as most of the passengers are on their way to the entertainment capital of America to have fun and see if they get lucky at the casinos. The added excitement comes from the fact that the flight crew help build this excitement on occasion.

A new comedy sitcom ‘LA to Vegas‘; seeks to show off that atmosphere as well as give a humorous spin to it. The show airs on Thursdays on FOX and is inspired by the game of poker. The sitcom revolves around the regular crew and passengers of a short Los Angeles to Las Vegas flight.

The crew is led by the booze-filled and self-centered pilot, Captain Dave, who is played by Dylan McDermott. His flight crew includes Kim Matula playing the disgruntled Ronnie and the deadpan Nathan Lee Graham. The staff has to deal with regulars like the superstitious gambler Artem played by Peter Stormare and Nichole, a stripper played by Olivia Machlin.

Lon Zimmet came up with the plot and turned it into a script. Zimmet said that he based the idea for the show around his experiences on his monthly flights from LA to Las Vegas back in 2003, when the poker boom was in full swing. A launch party for the sitcom recently took place at the Bellagio and Zimmet reminisced on that period of time when he was able to live on his poker earnings while he struggled to make it as a writer. Remembering the experiences a decade later, he thought that it would make a pretty good show and hopes that the audience will share the same sentiment.

The show's executive producers agreed with him. They include the popular comedian Will Ferrel, Oscar winner Adam McKay, and ‘Modern Family‘; co-creator Steve Levitan. Levitan should know a thing or two about writing airplane comedies. His first television job was writing for NBC's ‘Wings,’ another airline sitcom, though it took place mainly at an airport.

Zimmet mentions that the main challenge for the show's writers was to balance the Las Vegas stereotypes and clichés with something original. He hopes that the show would be able to present an authentic Las Vegas experience. This is why he packed the writing team full of people who have experienced Las Vegas first hand and who can write comedy that highlights the unique Vegas atmosphere. Besides focusing on the airline and the airport, the series plans to venture out into the city to fully showcase the place and add unique storylines and comedy situations.