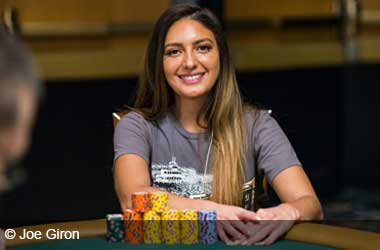 Kelly Minkin is one of the more established female poker pros on the circuit with over $1.5 million in career prize money based on the Hendon Mob. Minkin created quite a buzz on social media over the weekend not for winning an event at the 2021 WSOP but for registering, then de-registering and once again re-registering for the WSOP 6 max event.

When social media learned what took place at the WSOP 6 max event, they went after Minkin as the poker community believed she had acted against the rules and the ethics of the tournament.

This behaviour is not encouraged because it can be used to gain an unfair leverage at the table. When a poker pro registers for an event and then arrives at the table and finds that there are a competitive bunch of players sitting at the table, they sometimes de-register as they know they don’t have much of a chance at winning at this table.

They will then wait for some time to come back and re-register and hopefully get another table where they find the players present are more beatable. This picking and choosing of opponents at the poker table using this strategy is not embraced by the poker community.

The WSOP was aware that Minkin de-registered and re-registered again and were happy to let her to continue to play at the poker tables. Some felt that this was unfair as Minkin was being given special treatment.

Kelly Minkin decided to respond via Twitter and clarify what exactly happened that caused her to de-register and re-register again. She said that when she initially registered and sat down at the table, she was seated together with two players that she did not know for 25 minutes. Minkin said one of those players had harassed her in the past and stolen money from her.

He said that was totally within my right. I registered hours later. The sensationalism for likes in these “guess who” tweets from the poker community is played and lame @AdamHendrix10

Since she wasn’t comfortable sitting at this table and play had not yet started, she decided to unregister for the event and then register later on again. Minkin said she informed the WSOP about her situation and got approval from the floor to re-join the event.

Once Minkin clarified what went on, the poker community on social media were a lot more tolerating but still felt the WSOP needed to do more to fix this loophole in its poker rules.