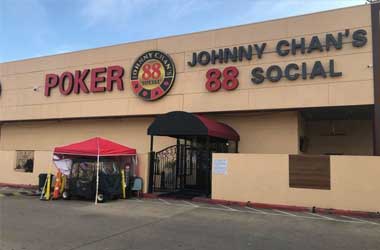 Poker players in Houston, Texas were caught by surprise with the sudden closure of Johnny Chan’s 88 Social Club. The reason for the room’s unforeseen closure remains unclear, but there are rumors that it could be dealing with financial issues.

The first signs emerged in December 2020 when 88 Social Club ended up cancelling its Winter Tournament Series over concerns it might not be able to cover the guarantees if the series failed to reach its targets.

Chan went on to operate the room while La founded his own poker club called the Legends Social Club located just a few hundred yards away from 88 Social. The competition resulted in a sharp decline in traffic at 88 Social, with many players transitioning to the rival room. This could have contributed to the club’s closure.

88 Social Club continued to spread games and pay out players until December 3.

The room did not make an official statement as to the closure, leading to various speculations. Some are claiming that the club had gone broke, while others allege that a manager had stolen some cash.

There are plenty of players who are still holding chips from the venue and they’re now concerned that those chips would end up without any value. The room’s financial obligation to players has reportedly gone beyond $1 million.

Mike Matusow recently claimed that Chan spoke to him about what really happened. On his vlog this week, Matusow shared that Chan’s business partner stole the money while Chan was competing at the WSOP in Las Vegas. As of now, we don’t know if the club will resume operations or will close for good. Players are still waiting for an official statement from Chan or the club.