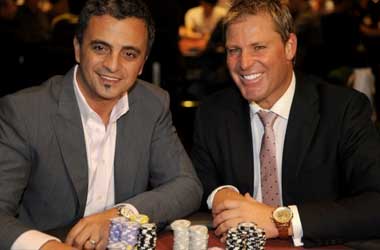 Shane Warne’s charity event, the Joe Hachem And Shane Warne Charity Poker Tournament has been cancelled after an audit investigation was ordered into the foundation after reports surfaced of financial irregularities.

However, there have been recent allegations by a couple of Australian reporters who claim that the charity is utilizing its funds improperly.

One of its major fundraising events, The Joe Hachem And Shane Warne Charity Poker Tournament which was scheduled to take place at the end of January was cancelled after the Australian consumer affairs regulator, Consumer Affairs Victoria (CAV) asked for an independent audit. CAV has asked the audit to be completed by end of February. It has also asked that the charity pay for the audit, a ruling that has been criticized by Warne.

Shane Warne has maintained that his foundation is in the clear, saying that TSWF has nothing to hide. The Consumer Affairs Victoria started monitoring the foundation last year after noticing issues with its reporting as well as accounting practices. One of the irregularities highlighted stated that the foundation did not file its annual report which was mandatory.

The Shane Warne foundation only provided partial information whenever CAV asked for detailed accounts of the charity to be submitted which led CAV to make a decision to ask for an independent probe in to the SWF. All the negative press and scrutiny of the SWF and the charity events used to raise funds proved to be too much for the cricketing legend leading him to cancel the popular Joe Hachem And Shane Warne Charity Poker Tournament.

In a statement, Shane Warne said,

Consumer Affairs, they now want an audit as a reaction to incorrect journalist reporting, which the foundation has to pay for…This is a disgrace and absurd and will go down as an expense. Go through everything you want at anytime as we have nothing to hide, but you pay for it, as the foundation would rather spend the $10,000 on children in need than on an audit.

Recent reports from Australian media suggest that not only has Warne decided to cancel his Joe Hachem And Shane Warne Charity Poker Tournament but also decided to shutdown the SWF for good.