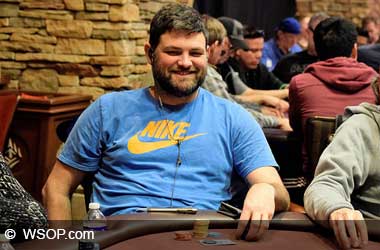 The latest online bracelet event at the 2019 World Series of Poker (WSOP) has been awarded to Jason “TheBigGift” Gooch.

The American poker pro triumphed in the $1,000 WSOP.com ONLINE No-Limit Hold’em Double Stack event outlasting a total of 922 players to capture his first gold and a top prize of $241,492.94.

Gooch’s latest victory came after he finished as runner-up in the $600 PLO WSOP.com online bracelet event which was won by Josh “loofa” Pollock. During this event, Pollock and Gooch engaged in an exciting heads-up battle which saw both players getting all the chips in the middle pre-flop.

Pollock flopped the nut flush, but Gooch managed to pick up two pairs after the turn, giving him a shot at making a full house. Unfortunately, the river was blank and Pollock successfully claimed his second bracelet.

Gooch entered the final table at the ONLINE No-Limit Hold’em Double Stack event as the runaway chip leader against eight other players. Max “MaxSparrow” Pescatori got it in with seven-jack suited but he was not able to get past Anthony “Scrotile” Augustino and Dario “Sirio87” Sammartino who both had a king-nine. Pescatori eventually ended his bid for a fifth bracelet, busting in 9th place for $17,349.

The game quickly progressed with Sammartino exiting the game after losing his king-queen to Gooch’s ace-jack. The Italian poker pro took home $75,094 for his fourth-place finish. Only minutes after Sammartino’s elimination, Augustino was sent to the rail after getting it in with queen-six against Brian “Pure_Reason” Wood‘s king-queen. Augustino settled for third place, earning $104,980.

Wood held a huge chip advantage entering into heads-up play against Gooch, but the latter managed to close the gap not long after, eventually taking the lead. During the last hand of the event, Gooch got all of the chips in with trips, and found no help from the turn or river to improve his hand. Gooch was crowned the champion, and Wood walked away with $148,543 for his second place finish.