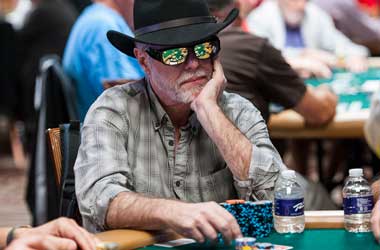 Poker player James Moore has won the World Series of Poker (WSOP) $1,000 Super Seniors title for the second year in a row, defending his title successfully. This year’s event saw a record field of 1,720 entries, which didn’t deter Moore. With a total prize pool of $1,548,000, the event has grown significantly when compared to 2016 when a total of 1,476 entries were registered creating a prize pool of $1,328,400.

The Super Seniors event is open to players aged 65 years or older. Moore’s win netted him prize money of $259,230 along with his second gold WSOP bracelet. His victory is all the more remarkable as he had entered into the final heads-up play with Kerry Goldberg, with a significant chip deficit and then slowly went on to built a lead. The battle between Moore and Goldberg lasted three hours and saw around 133 hands of play.

In a statement Moore said

I am shell-shocked at this point. Once we got to even in chips, that's when I began to feel more confident

A full-time Radiologist from the Philadelphia area, Moore entered the Super Seniors Event last year for the first time when he became eligible and ended up winning. He has since then been focusing on improving his game by playing frequently in events held around Philly and has also participated a WPT event in Atlantic City.

Moore stated that he had improved his game by trying to make better decisions at every turn and also by becoming more cautious with respect to folding to a bet in tough situations. The event’s final table had nine players and play lasted nearly eight hours. It included notable players such as Veronica Daly, Ken Aldridge and Darrell Ticehurst.

Finishing in second-place, Kerry Goldberg took home $160,120 while at third place was John Isler with $115,357. Daly won the title of Last Woman Standing for this event and ended up in fourth place taking $84,005.

Moore has said that he will be returning next year to defend his Super Seniors title and to also play at the Seniors Event. He added that he will continue playing poker and getting better at the game as he wanted to be known as someone with a deep understanding of the game. Back-to- back victories are rare and last player at the WSOP to do so was Tuan Le, who won the title in the $10,000 2-7 lowball championship in both 2014 and 2015.