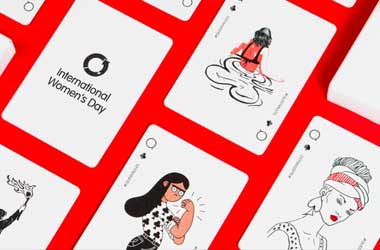 The campaign to attract more women into poker is making some progress. New research shows that there has been a significant rise in the number of female poker players across Britain in 2021.

We take a look at some recent stats as we celebrate international women’s day on March 08.

Number of New Female Players Up by 22%

The latest research, a collaboration between online poker operator 888poker and PR firm Hatch, suggests that more women showed up at the poker tables over the past year. In Britain, there has been a 22% increase in women playing poker, based on new player buy-in data in which men accounted for just 14%.

The study also found that more women have played the game in the past five years, with the figure up by 23% for female players and 22% for their male counterparts.

While women have become more open to trying out new formats, majority (48%) still prefer to play casual games with family and friends. The format is also a top choice among 54% of male players. As to the reason why women play poker, 58% say they play the game mainly because of its fun and social aspects, while 37% believe poker is easy to learn. A significant number, 33%, also think it’s consistently easy to earn money playing the game.

The research also shows that 31% of women have never tried playing in any competitive format. Despite this, the latest numbers are generally positive and serve as proof that the tables are turning, according to 888poker.

The results of the latest study are great for the entire industry which for so many years have struggled to attract more women into the game. The good news comes just in time for International Women’s Day which is celebrated annually across the world on March 8.

Major operators are marking the event by hosting special tournaments. Among them is GGPoker which ran daily freerolls throughout the first week of March in partnership with Fantastic Ladies in Poker (FLIP). The site is also hosting an International Women’s Day Bounty event today, March 8 at 19:00 GMT. Female players will be competing for $50,000 in guaranteed prize pool for a buy-in of only $25.