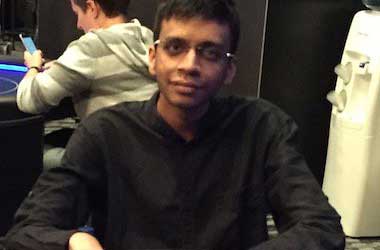 An international student studying at the University of St Andrews in Scotland is paying his way through university by earning an average of £20,000 a year through poker. Students in Scotland typically end up with debt of around £10,000 but this particular one will not need to worry.

Anmol Srivats, a Math undergraduate from Bangalore, India has so far earned £80,000 over the past four years, winning up to £6,000 on a single hand. He netted a stunning sum of £50,000 in his first year alone. The 22-year old math whiz Srivats has won big at both online poker games and live poker tournaments.

He began playing poker at the age of 15 after his father staked him the equivalent of $10 for a game. A subsequent win of £240 ($300) in an online tournament set him off on his poker career.

Srivats is clearly putting his strong math skills to use for winning at poker but he has said that he is not getting carried away by his extraordinary success at the game. In a statement, Srivats said,

My poker benefits my maths rather than the other way round. I think the same skills that make me good at poker make me good at maths.  I cover my living expenses each year, but I know it's possible to lose money very quickly, and I don't spend lots of money on flashy things.

Srivats added that the money was largely for making his life better, be it eating at restaurants instead of the university food halls or taking a taxi instead of walking. Speaking about his biggest wins, Srivats named a win of £5,700 in one hand where he went all-in on pocket aces, as well as a $20,000 (£16,000) win in an online tournament. Now in his final year, Srivats intends to utilize his numeracy skills in his professional career as well. He has said that he is seeking to become a commodities trader.

Calling it a natural transition he pointed out that there were several similarities between the two fields. He noted that traders are often looking for people who can think mathematically when under pressure. Srivats stated that he was adding his poker career highlights to his resume, since several of those interviewing also often play poker</a., highlighting the connection between the game and the high-risk, high-pressure profession.