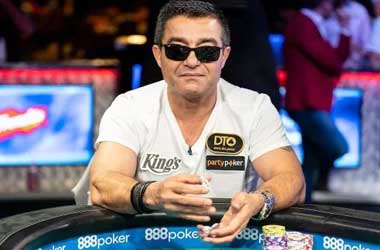 Ensan entered the final table holding a massive chip advantage and maintained his lead despite going through some bumps at times. The 55 year old poker pro eventually finished off Dario Sammartino heads-up to capture the biggest victory of his career.

Reflecting on his win, Ensan who is 888poker pro said getting through a mammoth field of players was incredible. He entered the event with just a simple goal of getting to the money, but luck was on his side as he managed to collect a huge starting stack on Day 4 which he held on to through to the final moments of the battle.

Everyone who makes it to the final table of the Main Event is bound to go home with a huge payday. However, the money keeps getting bigger as you keep eliminating players from the final table.

Three players returned for the final session to play down to a winner. Ensan was holding a tight grip on the chips with 326,800,000 to his name. Canadian poker pro Alex Livingston was in second position with 120,400,000, while eventual runner-up Sammartino came in as the short stack with 67,600,000.

It wasn’t an easy battle for Ensan. Early in the game, Livingston accelerated and picked up pots, narrowing the gap after a few hours. Italian poker pro Sammartino was involved in the dealer mistake on day 7 was making some progress as well and managed to climb back to 100,000,000. During one point, Livingston briefly took the lead, but Ensan quickly reinforced his dominance and regained his position. Livingston fought for a huge pot against Sammartino but eventually lost it.

He never recovered after that and eventually hit the rail in third place after losing his ace-jack to Ensan’s ace-queen. Livingston took home $4,000,000 for his third place finish.

Ensan entered heads-up play slightly above Sammartino in chips but it never was an easy ride for the German poker pro. After four hours, the final hand finally arrived. Ensan was holding pocket kings, with Sammartino flopping a flush draw. The latter shoved all in and Ensan quickly made the call.

Sammartino found no help from the river and Ensan’s rail erupted in celebration as he held his first ever WSOP bracelet. Sammartino put up a good fight though, and he took home $6,000,000 for his runner-up finish.