Home Poker Games Could Soon Be Illegal In Michigan City

Home Poker Games Could Soon Be Illegal In Michigan City 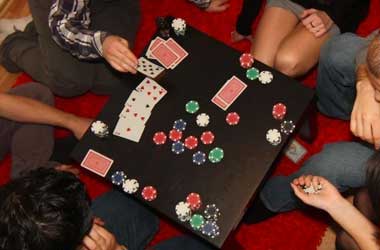 Under new rules that were approved by the Lansing City Council, playing a friendly game of poker with your buddies could get you in hot water.

The Lansing City Council recently passed an ordinance by a 7-1 margin that gives the city increased authority to put the hammer down on gambling.

The ordinance states that any form of gambling that does not have the state’s approval could lead to criminal penalties.

The ordinance does not make a specific mention of home poker games but the lone council member to vote against the measure said that the ordinance means that law enforcement has the authority to put a halt to residential poker games in which there is no financial incentive or rake to host the home game. Council member Brian Jackson said that the new ordinance gives police new tools to fight illegal video gambling but said the new law was far too generic.

Jackson who also happens to be a lawyer, said that the intent of the new ordinance might be noble but that a future police chief might interpret in a way that makes it illegal to participate in friendly home games. Under the new rules, those who are caught participating in a form of gambling that is not approved by the state run the risk of a misdemeanour charge. Offenders can be punished with a 3-month jail sentence and a $500 fine.

The council members that voted in favour of the new rules apparently stressed that enforcement of illegal gambling will only occur on a complaint-by-complaint basis. However, Jackson maintained that the wording of the ordinance leaves it open to broad interpretation. Criminal defence attorney Karen Phillips said that an investigation into a home game could be launched if somebody notified law
enforcement about it.

Getting Caught Could Lead To Seizures

The new rules state that both the host and the participants could all be charged with criminal offenses if caught. The ordinance says that nobody should be allowed to frequent, participate or host any place that promotes illegal gambling.

Having police raid an illegal home poker game could result in authorities confiscating property. Those affected would need to go to court if they wanted their seized property returned. It would be possible for police to take everything associated with the game from money right down to the cards. Phillips hopes that the ordinance can be fine-tuned to protect home poker games.