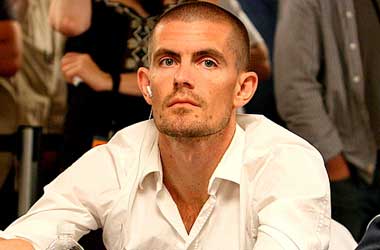 The famed Danish poker pro Gus Hansen is finally making a re-appearance on the global poker scene. Hansen was spotted playing at a Las Vegas casino in the company of other poker greats such as Phil Ivey, Daniel Negreanu and Patrik Antonius.

Gus Hansen was one of the biggest names in the poker community during the early days of the poker boom, Hansen was consistently in the spotlight for his high-roller games and played both online and in live tournaments. He has a number of acclaimed accomplishments and has won millions playing both online and live poker. The Hendon Mob ranks Hansen in second place in the money list of all time poker players in Denmark and puts his total live earnings to more than $10 million.

He was associated with Full Tilt Poker as one of its ambassadors and continued even after Black Friday. Full Tilt subsequently dropped Hansen and Hansen slowly dropped out from the public eye. During the last couple of years, Hansen concentrated more on the online poker market and there were rumours that he was losing heavily and consistently.

According to industry sources he was down $20.74 million in lifetime losses after playing 1.5 million hands on Full Tilt and down $1.38 million on PokerStars after playing nearly 64,000 hands. Hansen states that his terrible win rate was due to poor game selection and a bad tilt factor.1 This apparently was also one of the main reasons why Hansen decided to take a break from poker and concentrate on other business ventures.

Speaking on his return to live poker after two years, Hansen said that he had been laying low doing other healthy projects while clearing his head, but was now looking to return to gambling.

In a statement, Gus Hansen said

My endeavors throughout my life have led me to gambling, whether it's one game or another. That's always going to be a part of me and I'm always going to be seeking that. Obviously, I'm not going to play as much. But I will always be around in some way, shape or form because I like it and overall I've done pretty well at it.

He said that not having played any poker for over a year, he was rusty and that showed in his games with fellow poker pros. He stated that although the results were not in his favour, he enjoyed being back and playing with the guys. One of the first major live poker tournaments that Hansen plans to take part in is the 2017 Aussie Millions.