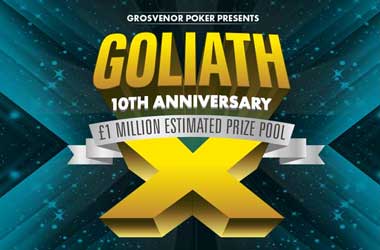 The popular Grosvenor Poker Goliath returns for another edition this year and it is expected to be record-breaking as the UK poker tournament marks its 10th anniversary.

The Goliath Main Event kicks off on August 27, but Grosvenor Poker will be hosting multiple side events beginning from August 25. Among them is a Mystery Bounty tournament as well as a GUKPT Main Event.

The Grosvenor Poker Goliath Main Event costs £150 to enter and the action gets underway on August 27, with each player receiving 25,000 in starting stack. The tournament features eight starting flights, with the final two adopting a Turbo structure. Surviving players will play down to a champion on September 4.

The tournament is expected to create a new record this year, with the total prize pool likely to hit seven figures. Apart from that, Grosvenor Poker is also running satellites which are available for as low as £1. The £1 satellites feed into either the £11 rebuy tournament or the £30 Freezeout, each of which will give away at least two £150 tickets to the Goliath Main Event.

Apart from the Goliath tournament, players may also take a shot at multiple side events designed for the low- and mid-stakes players.

For those playing on a limited bankroll, the schedule includes RedTooth events with affordable buy-ins of between £61 and £86.

Tournaments within the £100 – £400 price points are also available, including a Women’s Championship event, 4/5/6 Omaha, Joker’s Wild, a Seniors tournament and a Mystery Bounty event which is likely to attract a huge turnout given the popularity of the format. The tournament kicks off on August 28 and has three Day 1 flights.

A GUKPT Main Event which comes with an entry fee of £1,000 is also included in the line-up and players can enter via two starting flights on August 25 and 26. Day 2 is scheduled for August 27, while Day 3 takes place the following day on August 28. The biggest buy-in event on the schedule is the £1,650 High Roller which kicks off on August 28.