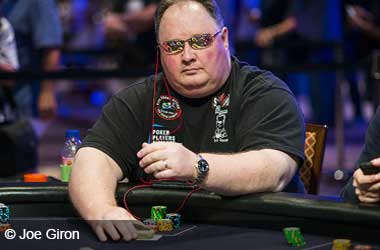 Greg Raymer has done well on the Heartland Poker Tour (HPT) in the past and he has started the New Year in style.

The 55-year-old took down the $1,650 Main Event in the HPT Ameristar East Chicago, to claim his fifth HPT Main Event title, and a first-place prize of $171,411. Raymer also won a Championship Package for the HPT Season XVI Championship worth $3,500.

Raymer, known by his nickname “FossilMan“, topped a field of 520 entries to capture the main highlight of the tour, and managed to break his own record for most Main Event wins in HPT history. He did that in epic fashion after defeating start-of-the-day chip leader Evan Bethyo in a thrilling heads-up match which Raymer said he was able to conquer with the right amount of “luck“.

For those looking for some online action why not checkout our selection of American poker sites with some excellent offers available.

Nine players made it to the final table, with Benjamin Craig becoming the first casualty after losing his ace-king to Bethyo’s pocket queens. The Chicago native took home $14,906 for his ninth-place finish. David Gutfreund was responsible for the next elimination, sending Dale Hackney to the rail in eighth place as his set of eights held against Hackney’s flopped top two pairs. Hackney collected $18,633 for his efforts.

Matt Schurter and Bohdan Slyvinski failed to improve their stack and later saw themselves running into ace-jack to end their bids in seventh and sixth place, winning $22,732 and $27,949 respectively. Tim Barany followed them to the payout desk after losing his king-jack to Bethyo’s aces. He finished fifth for $36,147.

Bethyo went on to eliminate Mark Yofon after finding much needed help on the flop hitting a set, against Yofon’s aces which failed to improve into a straight. Yofon busted in fourth place taking home $48,295. Raymer scored his first knockout of the final table after finishing off Gutfreund in a blinds battle, forcing the latter to settle for fourth with $69,462.

Raymer entered heads-up play against Bethyo with a 2:1 chip disadvantage. But the 55-year-old managed to even the stacks early in the game. Raymer was able to take the lead as play progressed, but Bethyo fought back, hitting a set in a huge pot. Subsequent hands saw Raymer regaining the lead, building a 4:1 edge.

The winning moment came when Bethyo flopped middle pair with Qh2d, and Raymer checked with 8s3c. Raymer then turned an eight, and check-raised Bethyo all-in. Bethyo called off his remaining blinds, with a nine on the river officially sealing his fate. Bethyo finished second for $104,789 – the largest score of his career. Raymer meanwhile added another title to his illustrious resume, bringing his total live earnings to more than $8 million.