Grand Prix Online Series Comes To partypoker In May

Grand Prix Online Series Comes To partypoker In May 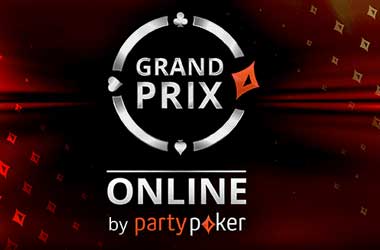 The Grand Prix UK is running an online edition on partypoker! It joins a growing list of events moving online as a result of the coronavirus pandemic.

Taking place from May 3 to 10, Grand Prix UK will feature a total of 19 starting flights and will culminate in a final battle on May 10 during which players will compete for at least £150,000 in guarantees. There will be no shortage of chances for players to win big as they will be allowed to enter in as many starting flights as they wish. They need to reach the end of the 15th level in each starting flight to be able to advance to the final day.

If you progress from Day 1 multiple times, you can only bring with you your biggest stack through to the final. Players kick off the action with 50,000 in chips played in 12-minute levels for each starting flight. The two Day 1s taking place on May 10 will be played differently though, as they will adopt a turbo and hyper-turbo format.

The Grand Prix UK online edition is exclusive to players whose partypoker accounts are based in the UK. Those residing in Canada, Germany, Brazil, and Russia will also be part of the action as each country will also have its own Grand Prix Online Series on partypoker.

The five Grand Prix events will run simultaneously, and the five winners will each win a ticket to a free six-handed sit & go tournament, alongside the champion of the Grand Prix 4 Dealers.

The player who takes down the SNG tournament wins a World Poker Tour Passport package worth $5,500. Other exciting WPT packages will also be on offer. Visit the partypoker website for more details.

The Grand Prix tournaments are a series of live events held in different locations around the world. These events are a hit among players as they offer them an opportunity to convert their small investments into huge winnings.

Since the first Grand Prix event which was held in Dusk Till Dawn in the UK back in October 10, the tour has continued to grow over the years, attracting thousands of players in each stop, and featuring guarantees as high as €500,000.

In 2017, Grand Prix UK made waves after giving away one of the highest guarantees in the tour’s history, a whopping £1,000,000. The tour has remained committed to its usual small buy-in, huge-guarantee format, and has grown with each passing year, creating a mark in the international poker tournament scene.