GGPoker’s Weekly MILLION$ Tournaments Has Over $6m Up For Grabs

GGPoker’s Weekly MILLION$ Tournaments Has Over $6m Up For Grabs September 25, 2020 Gabrielle Monet

GGPoker’s Weekly MILLION$ Tournaments Has Over $6m Up For Grabs 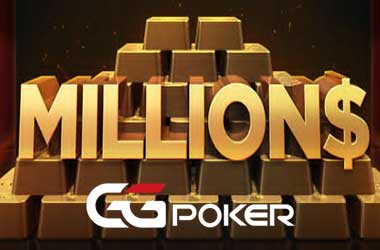 GGPoker continues to shower mouth-watering prizes with their MILLION$ tournaments, giving away over $6 million in guarantees each week! GGPoker has a line-up of tournaments that suit all bankrolls.

Players get to choose from four value-packed tournaments running each week, namely the Zodiac MILLION$ which is designed for players in the Asia-Pacific region, the Global MILLION$, High Roller MILLION$ and the Super MILLION$. The key details for each of the tournaments are explained below.

The Zodiac MILLION$ is a multi-flight tournament aimed at Asia-Pacific players. It has an entry fee of ¥500 (approx. $75), with a guaranteed prize pool of ¥1,000,000 (approx. $150,000). Day 1s begin on Sunday at 3:00 pm, running throughout the week, with Day 2 (final day) also scheduled every Sunday at 1:30 pm. Players can enter in more than one flight until 11 am on Sunday, but if they manage to advance more than once, they will only be able to carry their biggest stack with them through to Day 2.

This $100 buy-in tournament comes with a cool $1 million guarantee. There are several starting flights running each day, offering a more flexible way for players to reach the final action which takes place every Sunday. If the actual buy-in is too big for your bankroll, you can qualify for a more affordable price via satellites.

The most interesting part is, GGPoker has increased the guarantee to $2 million, and with over 3000 players registering and more flights to play, expect that figure to be smashed!

If you are into high-stakes action, then the High Roller MILLION$ is a must-try. The tournament features a bigger buy-in of $500, with $2 million in guarantees on offer. Like the other MILLION$ tournaments, the final action takes place every Sunday.

The latest winner of the High Roller MILLION$ was Douglas “SEPALOGUOD” Lopes who walked away with $256,974 in top prize after topping a field of 576 players. All in all, a total of 450 players finished in the money, with the min-cash weighing in at $1,155.

The biggest buy-in tournament among the MILLION$ line-up comes with an entry fee of $10,000. For that investment, you’ll get the chance to win a share of the massive $3 million guaranteed prize pool. With such huge prize money at stake, expect some of the world’s top pros to join in on the action.