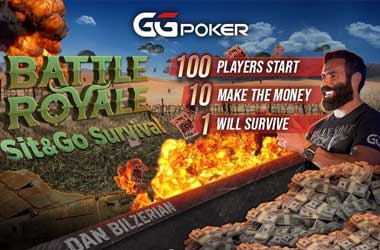 There’s a new poker tournament format for players to try out on GGPoker with their controversial ambassador Dan Bilzerian taking center stage.

The new game is played as a Hold’em Sit & Go, which involves three levels: Rush, Shootout, and Bounties/Final Table.

In the Rush Zone, players engage in non-stop action until there are just 50 of them left, according to kills, most hands played, and chip stacks. This level has a time limit of 15 minutes. When the time is up, those outside of the top 50 are officially out of the game, and their bounties are added to the prize pool. The remaining 50 will then advance to the next stage, the Shootout Zone.

In the Shootout Zone, players are spread across ten five-handed tables, and will battle it out until there’s just one player left at each table. Again, the action has a 15-minute time limit. If there are still multiple players left after the time limit, the action switches to All-In Mode, where each one is set all-in every hand until only one player remains per table.

The 10 survivors will then head over to the Final Table, where the game is played as a standard bounty tournament, with no time limit. A 5-minute chess clock is implemented, with blinds increasing every 3 hands. Each remaining player is guaranteed to take home some cash, with the battle royale champion winning 21.13% of the prizepool.

Since there are bounties involved in the tournament, players get the opportunity to boost their winnings via bounties they win with each knockout they make all throughout.

When you play the new game, GGPoker awards you with points which will count towards a weekly Battle Royale leaderboard, where you can win your share of an additional $15,000 worth of prizes. The leaderboards will run until June 30th. You might want to play the game between 10:00pm and midnight UTC daily, as you can earn points at 1.5x their regular rate.

GGPoker is banking on Bilzerian’s popularity to help the operator attract more players and use the popularity of the self-proclaimed King of Instagram’s to bring in more business.