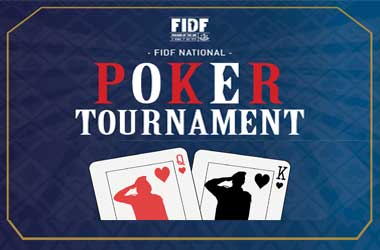 Players may take part in the event via a qualifying round which will take place in various locations across the US, including Los Angeles, New Jersey, Miami, Georgia, Virginia, Maryland, and Long Island. The top players from each local round will advance to the nationals, with the finale to be livestreamed on premier poker site Faded Spade.

A number of top poker players will take part in the charity event including top Israeli poker pro Eli Elezra. The 60-year-old is an accomplished poker pro with more than $3.8 million in total live earnings. He is a four-time World Series of Poker (WSOP) bracelet winner, and also holds a World Poker Tour title. His biggest score came in 2004 when he won the $10,200 NLHE Final Day during the Mirage Poker Showdown in Las Vegas for $1 million.

Elezra, who was born in Jerusalem but now lives in Vegas, previously served as an officer in the IDF Golani Brigade. He is a long-time supporter of the IDF, and he is thankful that he is being given another opportunity to support them by becoming one of the celebrity players participating in the upcoming FIDF National Poker Tournament.

Poker broadcaster Jeff Platt will also be joining in on the action, which will take place at the virtual felts. All of the money raised from the tournament will go towards multiple programs dedicated to IDF soldiers.

FIDF has been providing various services to members of the IDF, wounded veterans, and the families of fallen soldiers since 1981. The non-profit organization sponsors a range of educational programs benefiting the Israeli soldiers and their families. Among them is the IMPACT! Scholarship Program which grants full academic scholarships to soldiers coming from disadvantaged socioeconomic backgrounds.

In return, the beneficiaries provide 130 community service hours to their respective communities on an annual basis. Other educational programs initiated by the FIDF include the Identity and Purpose Programs, Israeli Journey, Amir Course and Eitan Program, all of which help strengthen the soldiers’ Jewish, Zionist, and Israeli identity.