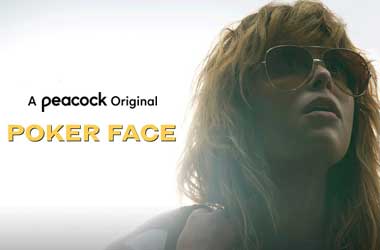 American video streaming service Peacock just released the teaser of “Poker Face“, which should not be confused with real poker faces, this one is murder mystery drama TV series starring Natasha Lyonne.

The ten-episode series is set to hit the screens on January 26, 2022. Its TV premiere will feature four episodes, with the other six arriving weekly every Thursday. If you can’t wait till then or want to watch poker inspired movies why not checkout our list of the best poker films.

Poker Face is created by Rian Johnson, the director of the critically-acclaimed 2012 science-fiction thriller “Looper“. The American filmmaker, who also wrote and directed the 2017 American epic space opera film “Star Wars: The Last Jedi“, is no stranger to the mystery genre.

Johnson’s first project, released in 2005, was the neo-noir mystery film “Brick” which was both a critical and commercial success. He was also behind the 2019 dark comedy mystery film “Knives Out“, which was also a box-office hit and earned him an Academy Award nomination for Best Original Screenplay.

Lyonne, known for her role as Nicky Nicholas on Netflix’s hit comedy-drama series “Orange is the New Black“, is more than just an actress. She is also a director, writer, and producer. Like Johnson, the 43-year-old also has a passion for solving mysteries, and that is reflected in her work on “Russian Doll” which was renewed for a second season and currently showing on Netflix. Both shows earned her Primetime Emmy nominations.

Poker Face tells the story of Charlie Cale, played by Lyonne, who has an extraordinary ability to determine whether someone is lying. She embarks on a cross-country road trip with her Plymouth Barracuda and resolves a string of crimes. With each stop, she meets a whole new set of characters who, in one way or another, are involved in a new crime she has to solve with her knack of reading people’s ‘poker face’ which poker players try to use to throw players off their game.

As stated in a joint statement from Johnson and Lyonne, who also both serve as executive producers of the series, in each episode of Poker Face, Cale will solve a self-contained puzzle. This means the audience can expect some sort of a mystery-of-the-week format.