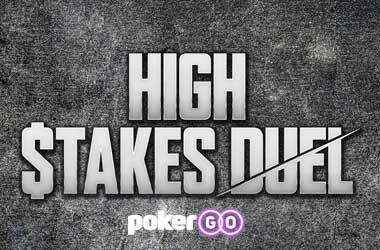 Two of poker’s most popular and highly-accomplished figures will come face to a face in an upcoming show on Poker Central’s direct-to-consumer OTT subscription video service PokerGO.

Antonio Esfandiari and Phil Hellmuth are the first two players to take part in the revamped popular show “High Stakes Poker” and have aptly named it “High Stakes Duel” which is set to make a debut on July 30.

The brand-new show follows an earlier announcement by Poker Central that it’s renewing its partnership with NBC Sports, which will continue to bring top-notch poker tournaments to mainstream audiences around the world.

High Stakes Duel will showcase heads-up matches between the poker elites, and the first episode will bring together no other than WSOP’s winningest player Phil “The Poker Brat” Hellmuth, and multiple poker world title holder Antonio “The Magician” Esfandiari.

High Stakes Duel is not your typical heads-up show as it includes some unique elements. Players kick off the action on Round 1 with a buy-in of $50,000. The winner of that round will then progress to Round 2, however the loser still gets the chance to set a rematch. Multiple Round 1 matches can take place between other players, doubling the stakes, and which can potentially generate a massive $12,800,000 in total prize pool by the time Round 8 takes place.

In order to win, the player is required to take down 3 consecutive matches prior to Round 6, or win 2 straight matches beginning on Round 5. The player will need to wait for 30 days for possible challengers, but if none emerges, he or she will take home the largest slice of the money.

Comments From Esfandiari And Hellmuth

Esfandiari said the match is a dream come true for him as he’s been trying to convince Hellmuth to play against him face to face on a unique condition – the winner will shoot the loser with a taser gun. Esfandiari, the winner of the second largest single payout in tournament poker history, is excited to play against Hellmuth and can’t wait to see who’s brave enough to proceed with the challenge and who eventually turns it down.

Hellmuth also responded, citing his previous heads-up matches with Esfandiari, from playing against each other at a young age, to guesting in televised cash games, and then bringing their heads-up skills to the NBC Heads Up Championship more than a decade ago.

Both players will take on each other at the PokerGO Studio at Aria Resort & Casino in Vegas on Thursday, July 30 at 9 pm. ET (6 pm PT).