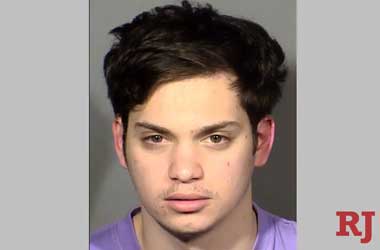 A poker player is facing charges in Las Vegas for his alleged involvement in a massive bitcoin scam. Filippos Liakounakos, 23, allegedly swindled as much as $500,000 from a crypto trading newbie.

The suspect was charged with identity theft leading to financial loss, theft of over $100,000, and a felony act that involves electronic mail or computer data transmission.

The victim, identified in the warrant as a novice cryptocurrency trader and whose real identity was blacked out, initially contacted the Internet Crime Complaint Center in November 2020 to report that he became the victim of bitcoin fraud. According to the complaint, the victim was duped into sending $500,000 in bitcoin to a business associate he knew on Telegram, an encrypted, cloud-based mobile messaging platform.

The victim later learned that the money had been transferred to an imposter and that the business associate was entirely clueless about the transaction. The $500K that the victim had sent included $50,000 in seller’s fee.

Upon investigating, authorities discovered that the culprit employed a dirty tactic called “peeling” wherein the amount was split and transferred rapidly through a series of transactions in an attempt to obscure where the money was going.

Just a month after the fraudulent transaction, the imposter once again approached the victim for a bitcoin transaction worth nearly $999,900. This time around, the victim managed to obtain an email from the scammer which led to the arrest of Liakounakos.

This isn’t the first time the suspect’s name has been dragged into a scam. Liakounakos was the subject of a thread on the poker forum Poker Fraud Alert wherein he was accused of defrauding World Series of Poker (WSOP) bracelet winner Cord Garcia out of a six-figure sum. The allegations came from Dan Fleyshman, a poker player and entrepreneur.

Liakounakos was also allegedly involved in a similar scam in an online cash game.

The 23-year-old appeared in Las Vegas Justice Court on Wednesday where his bail was set at $250,000. The Clark County Chief Deputy District Attorney stated that the suspect is a potential flight risk considering that he has no relevant connection to Vegas.