Fedor Holz vs. Wiktor Malinowski Could Be The Next Heads-Up Battle

Fedor Holz vs. Wiktor Malinowski Could Be The Next Heads-Up Battle March 1, 2021 Gabrielle Monet

Fedor Holz vs. Wiktor Malinowski Could Be The Next Heads-Up Battle 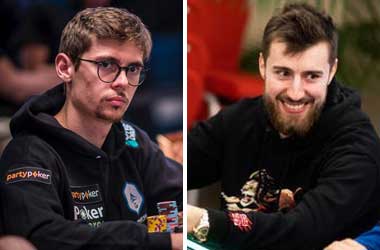 It looks like another high-profile heads-up battle is about to happen, this time between German poker superstar Fedor Holz and Polish online poker legend Wiktor Malinowski.

In August 2020, Malinowski was included in the line-up of participants for the Run It Once Legends Showdown, a weeks-long competition which saw some of the world’s best heads-up no-limit players battle it out in €50/€100 heads-up no-limit Hold’em.

The Polish poker pro declined to take part in the competition, as he was not satisfied with the “small” stakes involved.

The RIO Legends Showdown was eventually taken down by Kevin Rabichow.

Malinowski was later invited as a guest on Joey Ingram’s podcast, and on the show, he said he’d be willing to play Rabichow in a separate match, this time at higher stakes. The 26-year-old also offered to battle it out with Holz at any stakes, and said he could play against the two-time World Series of Poker bracelet winner while “drunk“.

The HU match between Malinowski and Rabichow has yet to happen until now, with the former instead deciding to face high-stakes pro Stefan Burakov in a different HU challenge which is currently underway on PokerStars.

As Malinowski deals with such a massive deficit, Holz suddenly showed up with a taunting challenge, saying he’d like to play against the Polish pro before Burakov “takes all his money“.

Holz is not just any other poker player. He currently ranks 8th in Hendon Mob’s All-Time Money List, and is the number one player in his home country of Germany. While the GGPoker ambassador is better-known for his accomplishments in the live tournament arena, so far amassing more than $32,500,000 in total live earnings, he has also achieved significant success in his online pursuits.

Malinowski has stayed true to his earlier promise on Ingram’s podcast that he won’t back off from a potential HU match against Holz.

In a reply to the German pro’s video tweet, the online legend said he’s ready, and Holz can even bring along his “two best students” and Malinowski will play all of them simultaneously, at any stakes, and any number of hands.

Hey @CrownUpGuy – where are you? I am waiting for you – pick your 2 best students and I play all 3 of you! #fedorlolz https://t.co/SQAAONgwbj pic.twitter.com/a2k3sznwVI

The poker community is now waiting for the final details of the match.