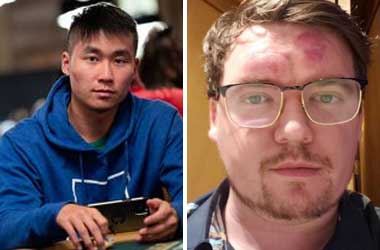 American actor Grayson Hunter Gross has made poker headlines recently, but for the wrong reasons. Poker player Ethan Yau has accused the Disney celebrity of scamming him of $1,000 while they were playing tournaments in Las Vegas.

Yau, who goes by the name “Rampage” on Twitter, called out Grayson for his unpaid debt, alleging that the voice-over actor simply ghosted him after borrowing $1,000 from him.

Yau, a World Series of Poker (WSOP) bracelet winner who has so far won over $350,000 playing mid-stakes tournaments, shared a screenshot of his conversation with Grayson where the actor repeatedly promised to return the money to him but never did.

Unfortunate to report I got scammed of a measly $1000. A reminder to never give/lend people you don’t know money.. no matter who they are/what the amount is.. so ridiculous @GraysonHunterG pic.twitter.com/pZjKTyDbd3

Yau reminded everyone to never trust people they don’t personally know especially when it comes to money matters, regardless of who the borrower is or how little the amount involved.

In Grayson’s case, he may be popular, and some people might be looking up to him, but his failure to pay the money he owed speaks a lot about his character. Yau said Grayson is putting his reputation on the line over a $1,000 scam.

Grayson played the role of Dylan on the Hub Network show “S.H.R.I.E.K” and is also popular for being the voice behind Prince Hugo on the Disney animated series “Sofia the First“. Apart from that, Grayson had also worked on several projects, including music videos and commercials.

Based on comments on Yau’s original tweet, this isn’t the first time that Grayson has been involved in fraudulent practices. Apparently, Yau wasn’t the first victim. The actor also allegedly scammed Kayla Sessler, one of the stars of the MTV show, Teen Mom: Young and Pregnant.

It took a while for Grayson to respond to Yau and when he did, he claimed that he was mugged and lost his $12,000 cash, phone, and wallet. He included a picture of him with what appears like bruises on his forehead. Yau isn’t buying Grayson’s story considering the number of people coming forward to say they were also scammed by the same person.

Update from Grayson. I don’t care about the $1000, I care more about the numerous people messaging me about how they got scammed by the same person pic.twitter.com/TOsWzDq6io

But Yau also has a dark past. In 2021, he was accused of running an illegal online poker network and breaking online gambling laws.