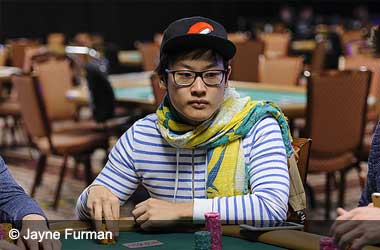 The tournament attracted a total of 593 entries and Yan topped them all to take home the lion’s share of the $5.7 million total prize pool, a cool $985,565. That win also gave Yan his first WSOP gold bracelet.

Only nine players returned for the final action on August 30, each guaranteed to walk away with $123,195. The first player to leave the table was Roman Hrabec from the Czech Republic who finished in 9th place for $123,195. Next to go was Brazil’s Rodrigo Selouan who collected $159,765 for his 8th-place finish. He was followed to the rail by fellow Brazilian Rodrigo Sirichuk who took home $207,189 for finishing 7th.

American poker pro David Peters was looking to capture his fifth gold bracelet but failed in the end after settling for 6th place with $268,691 in winnings. Belarusian Aliaksandr Hirs began the day as the chip leader but eventually bowed out of the game in 5th place for $348,450.

Hungary’s Istvan Briski was next out, transforming his $10K buy-in into a $451,883 payout. Belgian poker pro Pieter Aerts, who was the shortest stack when the final action began, managed to stay in the game for much longer and ultimately claimed 3rd place for $586,020.

Zhewen Hu entered heads-up play against Yan but the New Zealander proved to be the superior player in the one-on-one match. His Chinese opponent received $759,974 for his second-place finish.

Yan is just the second player from his home country to become a WSOP champion. The first was Simon Watts who claimed New Zealand‘s first WSOP gold bracelet back in 2010.

You may check out the WSOP website for the full schedule of the ongoing series.