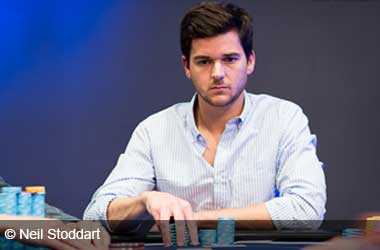 David Benefield has made a successful comeback after winning the £25,000 Short Deck Ante-Only event at the Triton Poker Series in London.

This victory marks the American poker pro’s first major live title after almost three years. He outclassed a field of 106 entries which included some of the top poker players in the world.

Benefield defeated Cheok Leng Cheong heads-up to secure £650,000 ($789,707) for his first place finish. The 33-year-old is known in online poker circles as a prolific high-stakes grinder, amassing more than $900,000 from online winnings playing as “Raptor“. Benefield’s live tournament record is also impressive, with an 8th place finish in the 2013 World Series of Poker Main Event among his many achievements.

The last recorded cashout that Benefield had was back in 2016 when he cashed out at the €10,300 High Roller at EPT Barcelona. The last two years were tough for him on the poker circuit but all that changed this year as he was able to finish in the money in the $25,000 PokerStars Players Championship(PPC) at the 2019 PokerStars Caribbean Adventure. He finished fourth in a Short Deck Ante-Only event at the Triton Poker Super High Roller Series in South Korea in March and took home $206,141.

Nine players made it to the final table of the £25K Short Deck Ante-Only event, with Canada’s Michael “SirWatts” Watson becoming the first casualty after exiting in 9th place for £65,500. He was followed to the rail by Dutch pro Jordi Urlings who finished in 8th place for £89,000.

The next player to leave the table was Talal Shakerchi who earned £117,000 ($142,147) for his 7th place finish bringing is live winnings to more than $7.6 million. Peter Jetten who only started playing as a regular at the Triton Poker Series in 2018, took home £148,300 after finishing in 6th place. Jetten has had a good run at Triton Poker events, earnings over $6.7 million so far.

After Jetten’s elimination, it was Chin Wei Lim‘s who was the next player to depart. He took home £190,000 for finishing 5th. Bjorn Li busted in 4th place for a career-best score of £236,500 while Hong Kong’s Pang Feng was the 3rd place finisher, winning £292,000 which was also his first-ever recorded payout on the Hendon Mob.

Benefield and Cheok Leng Cheong were the two final players at the table and he got the better of Cheong who finished with £445,000 for his 2nd place finish. Benefield has had an impressive run at the Triton Poker Series in London as he also finished in 8th place in the £100,000 Short Deck Main Event winning £368,100.